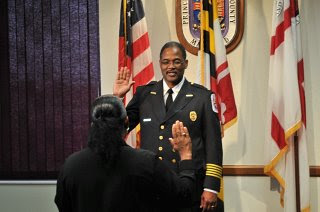 UPPER MARLBORO, MD – Prince George’s County Executive Jack Johnson’s nominee for Fire Chief was unanimously confirmed today by the County Council. Eugene Jones was sworn in immediately following his confirmation hearing.
“Chief Jones has a comprehensive background in fire/rescue service and emergency preparedness and an impressive record of professional achievement,” Johnson said. “Prince George’s County is fortunate to have such a competent and dedicated individual as our Fire Chief.”
Jones, a resident of Beltsville, had been Acting Fire Chief since February. He originally joined the Prince George’s County Fire/EMS Department in September 1983, where he served for twenty-four years before retiring at the rank of Major in October 2007. As a Major he served as the Department’s Equal Opportunity Officer and Disciplinary Coordinator for two years.
“I am honored the County Executive has given me the opportunity to serve the people of Prince George’s County in this manner. I have been a resident of Prince George’s County for the past 25 years and I have always loved my job,” Jones said. “The County Executive has made improvements in the Fire/EMS Department during his administration and he should be proud to know that he has contributed to us being one of the best Departments in the region.”
During his career in the Fire/EMS Department, he held several roles which began in the Emergency Operations Command. For 10 years, he led the Department’s Peer Mediation Team. Prince George’s County firefighters were among the first in the nation to establish this program which trains firefighters to provide peer mediation services to their colleagues. As a Battalion Chief, he supervised the day-to-day operations of more than 50 personnel and coordinated the Emergency Response Operations of Fire Suppression, Emergency Medical and Hazardous Materials calls on local, street and box alarms. He also served as the Executive Assistant to the Public Safety/Homeland Security Deputy Chief Administrative Officer where he helped to carry out the administration of the county’s public safety system.
He has received numerous awards including the Fire Chief’s Special Achievement Award for his service to the citizens of Prince George's County and his continued commitment to community service. This is the highest honor bestowed upon a firefighter. Jones manages a $112 million budget and oversees a department of 825 uniformed and civilian personnel, and has improved relations within the county’s combination system of volunteer and career firefighters. He attended Prince George’s Community College and he has earned numerous certifications and training from programs including Nationally Certified Fire Officer IV, Hazardous Materials Incident Management System, and Equal Employment Opportunity Training.
He is a member of the International Association of Fire Fighters, the International Association of Black Professional Fire Fighters, and the Community Emergency Response Team Leadership Group.

THE WASHINGTON POST - July 15, 2009
Pr. George's Acting Chief Made Permanent
The Prince George's County Council yesterday unanimously confirmed acting fire chief Eugene Jones as its permanent choice, disregarding the recommendation of the firefighters union to reject him.
Dozens crowded the County Administration Building for Jones's confirmation hearing. Although many supported the confirmation, Doug Bartholomew, president of the International Association of Firefighters Local 1619, opposed it, saying the county is unsafe because Jones has not developed an adequate staffing plan in tough economic times. Council members and others credited Jones with building relationships with the volunteer firefighter community and advised him to develop a staffing plan that would mend fences with career firefighters.
Jones, of Beltsville, will be paid about $130,000 in salary, said fire department spokesman Mark Brady. Before becoming acting chief in February, Jones served as the county's exercise and training officer for homeland security. He retired as a major in the fire department in 2007. -- Matt Zapotosky