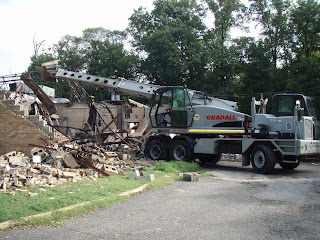 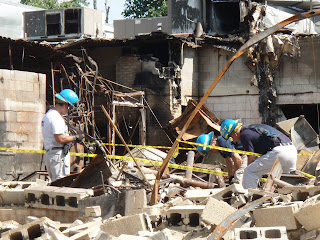 Fire Investigators from the Prince George’s County Office of the Fire Marshal returned to 1501 Southern Ave, better known as Byrne Manor, to conduct an Origin and Cause determination. On July 28th, the day of the fire, Investigators were unable to get into certain areas due to structural instability of the building. These areas were examined on Thursday, August 20, 2009, by the Office of the Fire Marshal and agents from the Bureau of Alcohol, Tobacco, Firearms and Explosives (ATF), with the assistance of heavy equipment from the County Department of Public works and Transportation (DPW&T) and the Fire/EMS Departments Apparatus Maintenance Division. The Office of the Fire Marshal is now classifying this fire as Arson. While removing debris, a very alert operator of the Gradall noticed a litter of kittens. The litter was uninjured and removed from the building to safety.

Fire Investigators have also determined that a fire that destroyed an Upper Marlboro house on June 15, 2009, has also been classified as Arson. This fire occurred in the 100 Block of Stan Fey Drive. Fire Investigators were assisted by an Anne Arundel County Fire Accelerant Detection/Arson Dog, ATF as well as officials from Nationwide Insurance Company on Monday, July 20, 2009, when a large crane and small bull dozer were brought on site to remove debris from the basement of the house to allow personnel an opportunity to continue their Origin and Cause determination

A joint investigation of these incidents will continue with the Office of the Fire Marshal and ATF, Baltimore Field Division. Anyone with information about these incidents is encouraged to contact Fire Investigators. Callers wishing to remain anonymous should call in to the Arson Tip Line, 301-77ARSON or Prince George’s County Crime Solvers at 1-866-411-TIPS (8477). You may also text “PGPD plus your crime tip” to CRIMES (274637) on your cell phone or go to www.pgpolice.org and submit a tip online. Tips provided to Crime Solvers may be eligible for a cash reward.
arson atf byrne manor pgfd