Battalion Chief Reilly is Employee of the Month 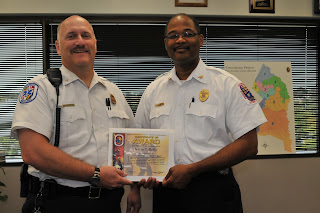 Prince George’s County Fire Chief Eugene A. Jones is pleased to announce that Fire Fighter/Medic Battalion Chief Kevin T. Reilly has been selected as the Fire/EMS Department Employee of the Month. Battalion Chief Reilly was presented with a certificate during a ceremony in the Fire Chief’s Office with many members of the command staff in attendance on September 30, 2009.

Fire Chief Jones spoke of the tremendous job Battalion Chief Reilly did in coordinating the events related to the “Extreme Makeover – Home Edition” television production during the month of August. During the award presentation Fire Chief Jones spoke of Reilly's effort for which he was chosen for this award. Chief Jones stated, “Battalion Chief Reilly coordinated the staffing needs and provided on-going assistance to producers and workers of ‘Extreme Makeover-Home Edition’ that re-built a home in West Lanham Hills. Additionally, he worked with the volunteer leadership of West Lanham Hills and ensured all the needs were well taken care of.”
Kevin Reilly is currently serving as the Commander of the Second Battalion which includes Bowie, Glenn Dale, and the Lanham area. He is a 25-year member of the Fire/EMS Department and resides in Clinton, MD.
Posted by PGFD at 11:28 AM