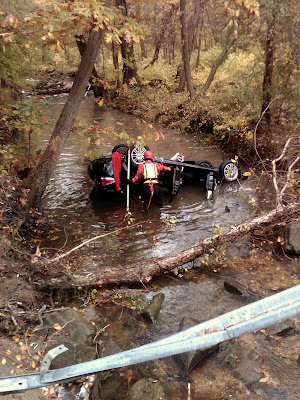 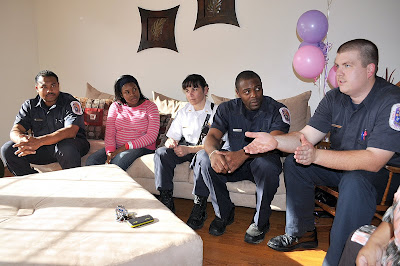 Prince George’s County Fire Fighter/Medics are credited with saving the life of a 23--year-old Clinton woman that is 8-months pregnant. At about 10:10 AM, Saturday, October 24, 2009, Sadé Davis lost control of her vehicle and left the rain slickened roadway in the 8900 block of Temple Hill Road in Clinton. Her vehicle overturned after striking at least one tree and landed upside down in a creek. EMS units from the Clinton Fire/EMS Station had already been dispatched to another medical emergency at a home in the 8700 block of Temple Hill Road, however, stopped for a citizen that was waving frantically to attract their attention. Ambulance 825 and Paramedic 825 were flagged down in the 8900 block of Temple Hill Road and informed of a vehicle had just ran off the road and overturned in a creek about 30 to 40 feet off the road. The citizen stated he did not see anyone get out of the vehicle.

The Firefighter/Medics notified Public Safety Communications of the situation and other nearby EMS units were dispatched to handle the original medical emergency call. When personnel reached the crash site they observed a vehicle upside down with the front end and driver’s area partially submerged in water that was up to 4 feet deep. Upon closer examination a motionless female was seen inside the vehicle that appeared to be unconscious and lifeless, she was suspended by her seat belt with her upper body under water. The crew knew that this was a life or death situation and if immediate action was not taken then Sade Davis would certainly die from drowning if not from the injuries sustained during the crash. The crew of four Firefighter/Medics entered the waist-high slow moving creek water and made their way to the vehicle. They attempted to make entry into the locked vehicle and made several attempts to alert the motionless occupant. As additional units and firefighters from the Clinton Fire/EMS Station were responding to the scene the crew made entry into the vehicle by breaking a window and assessed the unconscious female occupant and determined she was not breathing and had no pulse.

Sade Davis was rapidly extricated and medics started cardio-pulmonary resuscitation (CPR). Medics also noted that the patient appeared to be in her third trimester of pregnancy. The engine from Clinton arrived and assisted in the removal from the creek bed to the paramedic unit where the patient was loaded on-board and immediately transported. While en route to nearby Southern Maryland Hospital paramedics were able to regain a pulse and sporadic breathing. Emergency Room personnel were able to stabilize the patient and transferred her to the Washington Hospital Center for evaluation and treatment of her near drowning combined with complications involving her pregnancy.

Additional Fire/EMS units from the Clinton area, including the Fire/EMS Departments Underwater Rescue Team, responded to the scene and performed additional searches of the vehicle and surrounding area for other victims of which none were located.

After spending four days in the hospital, Sade Davis was released and sent home. Before leaving the hospital doctors told Sade that it was the actions of the Fire Fighter/Medics that saved her life and protected her pregnancy. Despite suffering a laceration to her head and short term memory loss, Sade appeared in good shape and glad to be leaving the hospital when she arrived at her Clinton Maryland home on Wednesday at about 3:00 PM. The crew that assisted her that day welcomed her home and explained to Sade, Cheryl Davis (mother) and Jerome Davis (father) what had occurred and the actions they took to save her life. The Davis family was very gracious and thankful in thanking the crews.

Prince George’s County Fire Chief Eugene A. Jones stated, “This is a story that involves true heroes that risked a lot to save a lot. Their actions are highly commendable and speak highly of themselves and the entire Fire/EMS Department.”