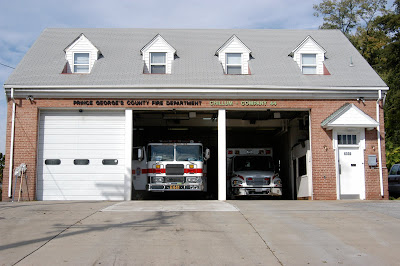 The Chillum Fire/EMS Station had not run an engine call in nearly a year. The engine company was removed in August 2009 as part of the Fire/EMS Departments redeployment of suppression forces. Up until Sunday, July 18, 2010, a paramedic unit was the only unit to respond from the station at 6330 Riggs Road. With the recent graduation of 32 firefighters from the Fire/EMS Training Academy, a decision was made to place the Chillum engine company back in-service. Prince George’s County Fire Chief Eugene A. Jones stated, “It is time to return a suppression unit to the Chillum Fire/EMS Station. I appreciate the support that the citizens and residents of the greater Chillum area have shown for their firefighters and paramedics in the year since they were removed. ” The Chillum engine company also has the added bonus for the community by being a Paramedic Engine. This means that the engine has personnel on-board that are trained as paramedics and have the equipment required to perform advanced life support in a pre-hospital setting. The Chillum Fire/EMS Station now has a Paramedic Engine and a Paramedic Unit.


Their first day back proved to be eventful; the Paramedic Engine was dispatched on 12 incidents and the Paramedic Unit on 7 incidents. A string of incidents occurred starting at about 10:15 pm. According to Acting Fire Fighter/Medic Captain Michael J. Marino, Chillum Fire/EMS Station Commander;

“Paramedic Engine 844 (Chillum) was alerted along with the Medic unit from Chillum to respond for a report of trouble breathing at 4922 LaSalle Road, a local skilled nursing facility. Once arrived, Paramedics assessed the patient with severe trouble breathing and initiated life saving measures while transporting the patient to a nearby hospital. Due to the severity and complexity of the illness a firefighter from the Engine crew assisted the medics and drove the unit to the hospital so both medics could concentrate on patient care. The engine crew proceeded to the hospital to pick up their third crew member after transport where they were then alerted to a report of a house fire in their first due. The reported address was 6033 10th Place which is extremely close to the Chillum fire/EMS Station. Paramedic Engine 844 responded with three personnel and advised Public Safety Communications to alter the assignment order due to their slightly extended response time. Upon arrival units reported and confirmed that a single story single family dwelling was heavily involved with fire and units from the surrounding area went to work battling the blaze. While the Captain and firefighter from the engine crew were involved with command and suppression operations it was found that one of the family members from the residence was having trouble breathing. The driver/paramedic from the paramedic engine company who had completed his fire ground duties now made himself available for patient assessment and began to treat the patient prior to the arrival of additional EMS units who assumed patient care.”

The fire on 10th Place caused an estimated $30,000 in fire loss and remains under investigation. A family of four were displaced and assited by the Fire/EMS Department Citizens Services Unit with temporary shelter. The family member that became ill was not transported and there were no additional reports of injuries.

Fire Chief Jones stated, “I would also like to acknowledge the efforts of surrounding fire/EMS stations for handling the additional call volume during the past 11 months. The efforts of Hyattsville, Takoma Park (Montgomery County), Adelphi, Bunker Hill and others have not gone un-noticed and your service to the citizens and residents has been superb.”
Posted by PGFD at 4:28 PM