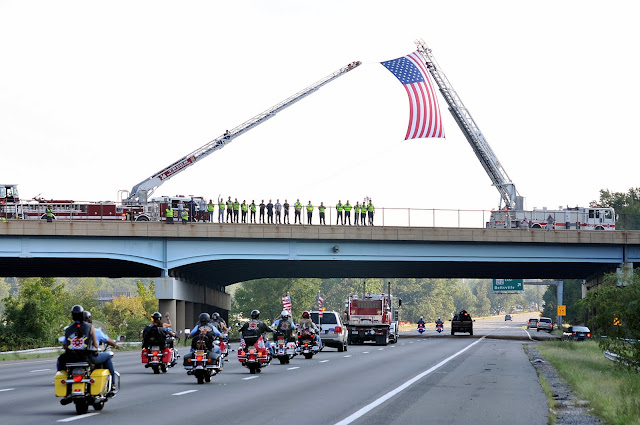 
About fifty career and volunteer members of the Prince George’s County Fire/Emergency Medical Services (EMS) Department gathered in formation on the overpasses of Route 95 to show support for the escort participants and to pay tribute to the 343 FDNY members that lost their lives on 9/11/01. Firefighters, medics and EMT’s from Savage (Howard County), Beltsville, Calverton, College Park, Branchville, Laurel and Berwyn Heights participated in the tribute. On the Powder Mill Road overpass in Beltsville ladder trucks from Berwyn Heights and College Park proudly displayed our American Flag in the middle of their arches in a dramatic display of support for the Iron and Steel Team and the symbolism of the World Trade Center steel.

Prince George’s County Fire/EMS Department Acting Lt. Colonel Steven L. Hess organized the event on behalf of the Department and stated, “It is obvious that the participants in this ride very much appreciated our presence along the I-95 corridor. It is important to ‘never forget’ and these are ways we can all come together, unified in a cause, and support those that paid the ultimate sacrifice almost nine years ago.”