The Prince George’s County Fire/EMS Department’s Bomb Squad successfully rendered safe what appeared to be explosive devices found in a District Heights home. The Bomb Squad was requested at about 3:00 pm, Wednesday, October 6, 2010, after a real estate agent came across what appeared to be 2 pipe bombs in the basement area of a vacant home in the 5800 block of Kentucky Avenue. 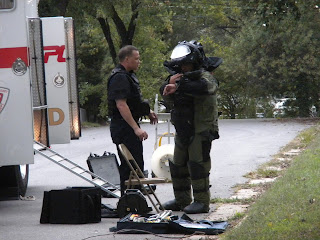 The Bomb Squad worked for nearly 4 hours utilizing their special equipment and personnel in full protective gear to disrupt the two devices and render them harmless. Fire Investigators from the Fire/EMS Departments Office of the Fire Marshal, the Prince George’s County Police Department and agents from the Bureau of Alcohol, Tobacco, Firearms and Explosives worked collectively to secure the scene, collect information on the packages and gather intelligence about the case.


After the successful disruption of the devices, components were documented and collected as evidence. A substance inside the devices will be taken to a laboratory to determine if it is explosive.

The investigation into the device and who may be responsible for the construction, transportation and placing device in the house is open and on-going.