At about 5:45 pm firefighters from the Chillum-Adelphi Fire/EMS Station 834 and other surrounding stations were alerted by numerous 911 callers of an apartment fire in the 1400 block of University Boulevard in Langley Park. Fire/EMS units arrived on the scene to find heavy smoke pushing from the pitched roof of three attached buildings. Heavy fire was soon located in a top floor apartment on the rear side of the 3-story apartment building.

Firefighters ensured that all of the occupants were safely outside and initiated an interior attack on the fire.  These apartments had previously undergone renovation work and a pitched roof was added above the original flat roof. The fire burned through the original flat roof and extended up into the attic area of the pitched roof.  A 2nd Alarm was sounded bringing a total of about 60 firefighters to the scene. Firefighters had to deal with the pulling apart the flat roof and cutting into the pitched roof to ventilate the thick smoke and extinguish the fire. It required about 20 minutes to extinguish the fire. No civilian injuries were reported.  One firefighter was transported to a local hospital after sustaining a minor injury to his hand.  The cause of the fire is under investigation.  Fire loss is estimated at $200,000.  A precautionary Third Alarm was sounded, however, was never utilized.

Eleven apartments, 50 residents, will be displaced. The County Citizen Services Unit, apartment management and the Red Cross were working on sheltering the displaced.

All of these pictures by Mark E. Brady 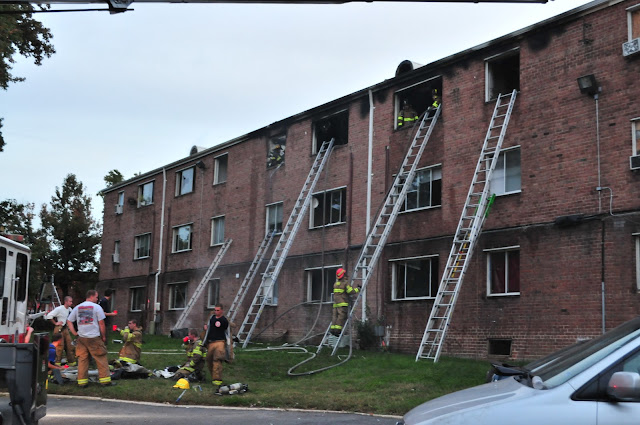 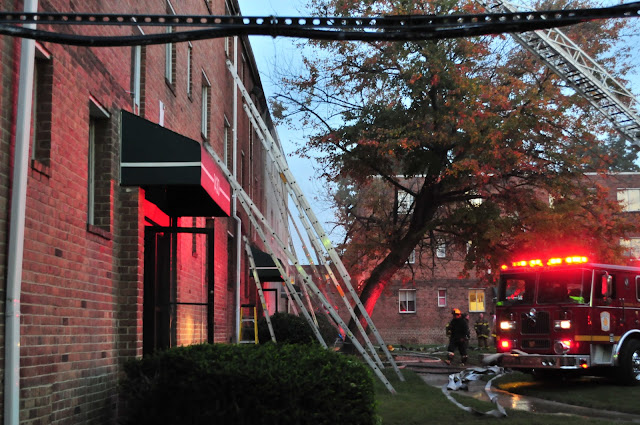