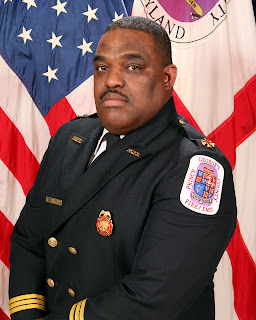 For extreme personal risk and the highest degree of judgment, zeal and ingenuity, on April 26, 2017, County Executive Rushern Baker, III and Fire Chief Benjamin Barksdale bestowed on Assistant Fire Chief Darren O. Ware the Fire/EMS Department’s Gold Medal of Valor.  He was honored for his quick thinking and heroic efforts that saved the life of a female victim who was experiencing a medical emergency while trapped inside her burning SUV.

The award was presented at the 40th Annual Public Safety Valor Awards.

For Assistant Fire Chief Ware, Wednesday April 20, 2016, was challenging from the onset, as the Department was conducting funeral services for a member killed in the line of duty.  Additionally, he was tasked with coordinating mutual aid resources and ensuring that personnel who do not work in our system or typically work together could do so safely and efficiently.  Finally, upon concluding his shift and heading home, Chief Ware noticed smoke on the road ahead of him and suspected it was likely a vehicle fire.

Nearing the incident, Chief Ware’s suspicion of a vehicle fire was confirmed.  He was surprised, however, to discover an adult female driver still inside.  After contacting Public Safety Communications for resources, he attempted to remove the victim from the vehicle.  His efforts were unsuccessful, as all four doors were locked; and the woman was unresponsive to his instruction to open the door.  With the fire beneath the vehicle was growing larger and progressing into the free burning phase, Chief Ware realized the increasing urgency of the situation.  He hurriedly returned to his vehicle, surveying the immediate area and hoping to find an object suitable to force entry into the SUV.  Things were happening quickly, but to Chief Ware it seemed like eternity in the face of the life-threatening situation confronting the victim.
Retired Fire/EMS Department Lieutenant Colonel Tyrone Wells, also returning from the funeral, spied the incident and stopped to provide assistance.  A construction tool belonging to an unidentified bystander was used in a second attempt to access the SUV.  Forcible entry was in progress when the victim inadvertently stepped on the gas pedal, driving the vehicle down the slope and off the shoulder of the road.  The fire was now at a difficult angle with extension into the engine compartment, posing greater peril to an already demanding situation.  The SUV’s new position had rendered the driver’s side inaccessible.  It was imperative to affect this rescue immediately or prepare for a tragic outcome.  Chief Ware and Colonel Wells, with the bystander’s help, managed to get down the slope and access the passenger side of the vehicle.

The Prince George’s County Fire/EMS Department isn’t the only organization to commend Chief Ware’s heroism, as he was also named the American Legion’s “2017 National Firefighter of the Year”.  Notification of this honor came from George Wehrli, Chairman of the American Legion National Law and Order Committee, who stated, “To maintain law and order” is one of the major objectives included in the American Legion’s Preamble to its Constitution.  As a National winner, you personify the meaning of America’s Bravest.  I wish you continued success in your career and look forward to meeting you at the National Convention.”

In July, Chief Ware will travel to Ocean City, Maryland, where he will be honored by the American Legion at the state level.  The following month, he will attend the organization’s 99th National Convention in Reno, Nevada, for the presentation of the National Firefighter of the Year Award at the National Commander’s Banquet.

In January 2017, Chief Ware was awarded “Career Fire Fighter of the Year” by the Knights of Columbus Sacred Heart Council No. 2577.  In addition, in March 2017, the Largo-Kettering Veterans of Foreign Wars of the United States awarded him “Outstanding Firefighter of the Year,” and the “National Firefighters Citation”.

Congratulations, Assistant Fire Chief Darren! Your actions reflect well on you personally and professionally and exemplify the excellent caliber of service we strive to provide to the residents of Prince George’s County