On Wednesday, March 3, 2021, members of two Arson Task Forces, along with investigators and detectives from multiple Maryland fire and police agencies, arrested 69-year-old David M. Crawford of Ellicott City. Crawford is facing numerous arson and attempted murder charges in connection with a series of incendiary fires of homes, vehicles, and residential garages since 2011.

David M. Crawford - booking photo 3/3/21
The twelve arson fires at the center of the case, which is ongoing, occurred in Prince George’s County, Montgomery County, Howard County, Frederick County, and Charles counties from 2011 to 2020. Each of the cases had been investigated separately in different jurisdictions and when surveillance video was discovered, the arsonist’s identity was hidden, in many of the cases, by a sweatshirt with a hood drawn tightly around their face. The arsonist exhibited a similar pattern of behavior using gallon jugs filled with gasoline and a stick wrapped in cloth to set the fires. Also there was a similar, but very generic vehicle description, a silver sedan, in several of the cases. The break in the case came shortly after the last known fire in 2020 when a link between the victims was discovered and that eventually led investigators and detectives to Crawford. Through the course of the investigation, it was determined that the structures and vehicles that Crawford intentionally set on fire were connected to victims with whom he had previous disagreements. All of the fires were at night. In six of the arsons, the victim and their families were inside their homes asleep. The attempted murder charges arose out of the fact that there were clear signs the residents were inside the homes at the time Crawford set fire to the structures. The victims include a former City of Laurel official, three former law enforcement officials including a former City of Laurel Police Chief, two relatives, two of Crawford’s former physicians, and a resident in his neighborhood. Crawford is a former local law enforcement official who last served in 2010 when he resigned as Chief of City of Laurel Police Department. Prior to that, he was Chief of the District Heights Police Department, a position he assumed after retiring in 2000 at the rank of Major for the Prince George’s County Police Department. His former places of employment are unable to comment as the case is now in judicial proceedings. A search warrant of Crawford’s residence was executed in January 2021 during which time investigators located several critical items of evidence, including a target list of the known victims, linking Crawford to the crimes. He was charged in court in multiple jurisdictions on Wednesday, March 3, 2021 and was subsequently arrested. See below listing for charges by County. Crawford is currently in the booking process at Howard County Detention Center.

At approximately 3:30 am, units arrived on scene to find a detached garage, two vehicles parked in the driveway and the adjacent house on fire. The victim and family were asleep in the home at the time of the fire. Surveillance video captured the suspect dousing the garage and driveway in between two vehicles with gasoline and then running back to a car and leaving the scene. Shortly after the incident, video of the suspect was released to the media in an effort to generate tips in the case: https://youtu.be/y1xX9qpkP28

At approximately 5:33 am, units were dispatched for a reported townhouse fire. On scene, crews found a fire burning in the rear of the townhouse which extended up the vinyl siding of the victim’s unoccupied townhouse and a neighbor’s townhouse. The neighbor was home at the time of the fire. An accelerant was detected at the base of the victim’s garage door which later tested positive as gasoline. Surveillance video captured the sound of liquid being poured and the clicking noise of a lighter.

At approximately 9:00 am, units were dispatched for a reported townhouse fire. Upon arrival, crews found a self-extinguished fire in the rear along the base of the home’s garage door. Surveillance video captured a suspect wearing a hooded sweatshirt tightly drawn around their face carrying a jug of what was later determined to be gasoline walking up behind the address. Liquid is then heard being poured followed by the clicking sound of a lighter and flames follow. Suspect is seen running away. Additional video captured a silver sedan leaving the area.

At approximately 3:15 am, units were dispatched for a structure fire. Upon arrival, crews found a fire in a detached garage. Video surveillance captured a loud explosion and a suspect running away from the scene wearing a hooded sweatshirt tightly drawn around their face. Samples taken at the scene later tested positive for gasoline.

At approximately 3:05 am, fire and police responded for a report of a vehicle fire. Fire was contained to the vehicle itself. Vehicle was unoccupied.

At approximately 4:19 am, units responded for a reported house fire. On scene, units located a single-family dwelling with a fire located in the attached garage. The family, three adults and two juveniles, were inside the home sleeping at the time of the fire and escaped. Fire was determined to be arson.

At approximately, 3:17 am, units responded for a reported house fire. Once scene, crews found a single-family home with fire showing. The family, two adults and one juvenile, were home at the time of the fire and escaped. Fire was determined to be arson.

Area of front lawn burned during the overnight hours. Contractors discovered the damaged area the following day. Cause of fire determined to be incendiary in nature.

At approximately 3:45 am, units responded for a reported house fire. The home was unoccupied as renovations had just been completed from the previous fire. Investigators determined the fire originated along the front of the house to include the garage and spread to the majority of the rest of the house.

At approximately 3:41 am, units responded to a reported house fire. On scene, crews discovered a fire along the entire base of a three-car attached garage. The victim and another adult were home asleep at the time of the fire.  It was initially believed that faulty wiring was the cause of the fire. On April 9th, the homeowner contacted the Office of the Fire Marshal. An investigator, who is also an Accelerant Detection Canine Handler with the Alcohol, Tobacco, Firearms and Explosives (ATF), responded to the scene. Samples found at the scene tested positive for gasoline and the cause of the fire was determined to be arson.

At approximately 3:54 am, units responded for a reported vehicle fire that had spread to the nearby home. The victim and family were asleep inside the home at the time of the fire. The fire had damaged the garage area of the house and a vehicle parked in front of the garage. The Maryland State Fire Marshal’s Office responded to the scene. Fire was determined to be arson.

Crawford is a suspect in this case. No charges have been filed in Charles County of this writing. The Maryland State Fire Marshal is leading this investigation.

If you have information in connection with these cases, please see below for information on how to contact your local County investigators or you can contact the Maryland State Fire Marshal’s Office. 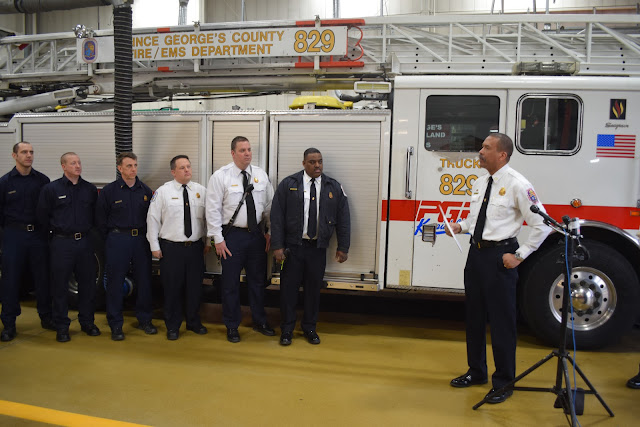 Firefighter/Medics Recognized for Rescue of 3 Children from Burning Home

MEDIA CONTACT: Mark E. Brady, Chief Spokesperson, 240-508-7930 MEBrady@co.pg.md.us     @PGFDPIO Prince George's County Fire Chief Benjamin M. Barksdale awarded several Firefighter/Medics this morning for their actions in rescuing three children from their burning house. On the morning of Sunday, October 29, 2017, Public Safety Communications alerted units to a house fire with the report of trapped occupants.  While in route, additional information was received indicating that the exact location of the trapped occupants was not known.   Upon arrival on the scene, crews from Station 829 encountered a two-story, wood frame dwelling with smoke showing from all sides.  A hose line was advanced by Engine 829 and firefighters proceeded upstairs to search for the reportedly trapped victims. The fire was quickly located as the crew from Engine 829 separated to search for victims.  Within minutes, the fire was extinguished and three victims were located, rescued and revived.  All