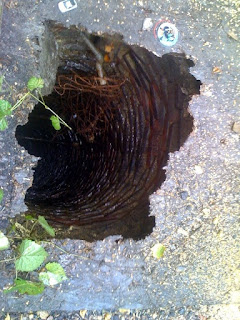 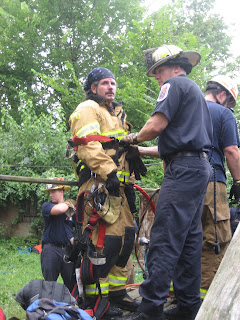 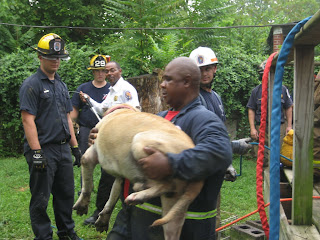 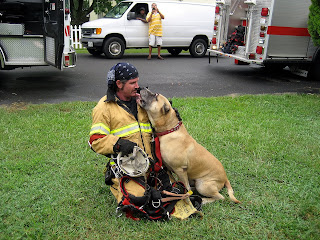 A rain soaked afternoon in the backyard of a Suitland home was the setting for the rescue of a beloved family member. On Friday, August 28, 2009, at about 2:00PM, Prince George’s County Firefighters answered the call from a resident in the 3400 block of Glenn Drive where his 3-year-old dog, Kujo, had crawled underneath the rear wooden porch and fell into an abandoned well. The dog barked and cried as the 30-foot deep well was already filling with rain water from the heavy storms that were occurring.

A risk analysis was rapidly assessed of the situation with incident commanders deciding to attempt the rescue with the safety of personnel paramount to any other concern. The Prince George’s County Fire/Emergency Medical Services (EMS) Department uses a risk versus benefit approach with rescues whereas we will risk-a-lot to save-a-lot. Firefighters understand the emotional and important role a pet has in the fabric of a family, however, the risk of placing a firefighter into a potentially hazardous situation was taken into account and constantly evaluated during the course of this incident. Firefighters went to work to rescue the 120 lb., Presia Canario, Kujo.

The Department’s Technical Rescue Team was summoned to the scene to perform the rescue. This team of firefighters has received training in confined space rescues such as this. Incident Commanders discussed the risk versus benefit decision and agreed that no member would be exposed to any risk that would be greater then that when the team is conducting a drill. Safety of all members was reinforced throughout the entire incident.

Firefighters set up for their rescue operation as the distressed Kujo constantly reminded them where he was by barking and whimpering. The wooden deck was dismantled to allow access to the well opening. Rescue operations included the application of fresh air into the confined space and a series of ropes and pulleys were set up. Fire Fighter Travis Lambert, a member of the Technical Rescue Team, wearing a safety harness was lowered into the well. Once at the bottom, he was able to apply a rescue harness to a cooperative Kujo. Upon Fire Fighter Lambert’s command, at about 5:15 PM, the dog and the dog’s new best friend were lifted up and out of the well where Kujo was reunited his owner. The dog’s owner stated, “The firefighters just lifted him out of his grave, thank you.”
Major Jerry Lamoria, when asked about the risk vs. benefit concept on this incident, added, "In addition to the safety of our own firefighters, we also had to be concerned about the safety and well-being of other people on the scene. If we had done nothing to get the dog out, someone would have tried a rescue themselves and gotten into trouble. We had to do a lot of talking to bystanders, and police officers who all thought we were taking too much time. The owner had actually tied himself onto a rope and was going to try it himself. To some this 'rescue' may seem fool hardy but one of the things we did consider was that by us removing the dog would ensure the safety of everyone else."