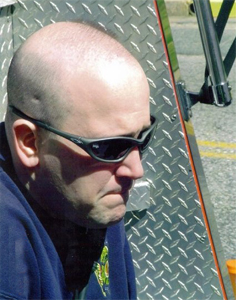 It is with deep regret that the Prince George's County Fire/Emergency Medical Services Department announces the sudden and unexpected death (medical) of one of our volunteer members.

We join the officers and members of the Berwyn Heights (BHVFD) and Hyattsville (HVFD) Volunteer Fire Department's in the sad task of announcing the passing of Jimmy Hook.

James Thomas Hook was born to Donna and Tommy Hook on March 29, 1966, and grew up along with his sister, Brenda, in Berwyn Heights. He attended Parkdale High School and joined the BHVFD in 1986.

While a member of the BHVFD he was a live-in member, served on the Board of Directors and attained the rank of Captain. His father, Tommy, was a Volunteer Chief and Life Member of BHVFD. His Mother, Donna, is a Life Member of the Berwyn Heights Volunteer Fire Department's Ladies Auxiliary.

His former wife, Lori, also held a position as the HVFD recording secretary. He has one son – Tommy, who is currently 11 years of age. Young Tommy would often frequent the fire/EMS station with his father and desires to follow his father footsteps to be a Fire fighter.

In 1990, Hook was hired as a County 911/police dispatcher. His final position with the county was that of a Fire Dispatch Supervisor in 2008. Jimmy was instrumental in the transition of Bureau of Fire/Rescue Communications becoming one integrated Police/Fire/EMS/Sheriff known today as Public Safety Communications.

Jimmy Hook passed away on the evening of Wednesday, February 23, 2011, at Laurel Regional Hospital where he was taken after suffering a medical emergency.

Funeral plans are still being made and we will provide updated information as soon as it is available.