Something Went Wrong in CHEM 242 Class


MEDIA CONTACT: Mark E. Brady, Chief Spokesperson, 240-508-7930
At about 12:30 pm today firefighters, paramedics, hazardous material units and University of Maryland (UMD) officials responded to a report of an explosion inside the Chemistry Building on the main campus in College Park.
Firefighters from College Park Fire/EMS Station #812 were first alerted to investigate an automatic alarm when dispatchers received calls from the UMD police confirming an explosion with fire and injured students.  The assignment was upgraded to a full hazardous materials box alarm with 16 pieces of fire, EMS and Haz-Mat units and about 70 personnel.
An experiment was underway during Chem 242 class in a first floor laboratory in Wing #3 of this sprawling 4-story building.  Students were conducting an experiment using nitric acid and sulfuric acid. The combination of these 2 acids does not normally cause such a violent reaction, however, when the combined product was introduced into a chemical waste container; a violent chemical reaction occurred causing an explosion with fire.  According to the Fire/EMS Department Hazardous Material Team it appears that the chemical waste container played a role in this incident, it is unclear what specific role that is.
As many as 11 students were in the lab when the explosion occurred.  Two female students in the immediate area of the explosion sustained injuries and were able to escape along with the others.  Two facility management employees attempted to extinguish the fire with dry chemical extinguishers and were partially successful in doing so, however, were exposed to the smoke and vapor from the chemical fire.
Upon firefighters and paramedics’ arrival, with reports of injured people and an active fire, firefighters made their way to a first floor lab and encountered a small fire in and near the laboratory chemical ventilation hood. The fire was quickly extinguished and firefighters immediately departed the lab.
In the meantime, paramedics located two female students suffering from first and second-degree chemical burns and multiple superficial lacerations about their body. The two students and the 2 UMD employees were de-contaminated on the scene and treated by paramedics on the scene. The students were soon transported to an area Burn Unit for treatment. They were transported in good condition. The UMD employees did not require hospitalization.
Hazardous Material personnel, wearing all appropriate personal protective gear, entered the lab and gathered samples of chemicals involved and conducted a visual observation of the damaged area. Personnel applied a product to neutralize the acids thereby mitigating any additional reactions.  The majority of damage from the chemical reaction and fire was contained in the laboratory’s chemical hood system.  The hood system is designed for safety in situations like this and appears, for the most part, to have done its job.
At about 4:00 pm, the Fire/EMS Department Haz-Mat team gave an all clear and turned the building over to UMD Environmental Safety personnel for clean–up and follow-up investigation.
All images by Mark E. Brady, PGFD PIO. 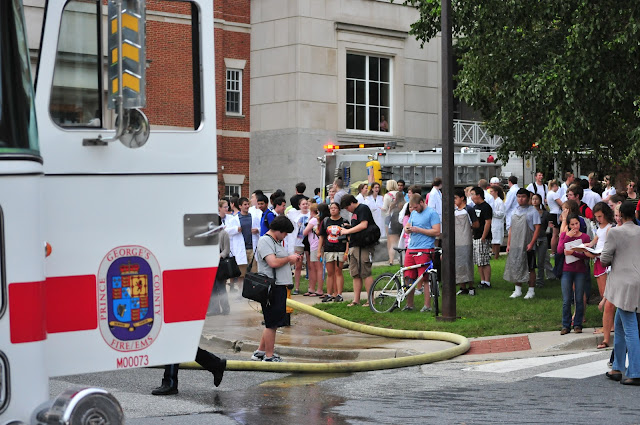