May 19, 2020
Prince George’s County Fire Investigators are working to determine the cause and origin of a residential fire that resulted in the death of 55-year-old Norman Rogers of Hyattsville.

On Sunday May 17th at approximately 5:28 am, Prince George’s County Fire/EMS units were dispatched to the 5900 block of Riggs Road in Chillum for a house fire with a person trapped. Within two minutes and twenty-eight seconds, crews arrived on scene and found a two-story single-family home with fire showing from the basement and first floor of the house. Crews immediately launched a search for occupants while working to extinguish the fire. Firefighters rescued Rogers from a second floor bedroom and transported him to an area hospital. Despite all life-saving measures, Rogers was pronounced deceased at the hospital. The cause and manner of death will be determined by a medical autopsy which is pending.

The home had a working smoke alarm and two other adult occupants self-evacuated. The fire was extinguished. No firefighters were injured. Property damage was estimated at 50k.

Fire Chief Tiffany Green has named veteran Emmy award-winning television reporter and former police media manager, Jennifer Donelan, as Director of Public Information for the Prince George’s County Fire/Emergency Medical Services (EMS) Department.
“I am extremely proud to have selected Jennifer to represent the men and women of this Department. We know how deeply dedicated she is to the residents of this County, to ensuring transparency and to championing the work of those who have dedicated their lives to serve the community,” said Chief Green.Donelan most recently served as the Director of Media Relations at the Prince George’s County Police Department for more than three years. During her tenure, she helped lead the Department through several headline-grabbing cases with a commitment to factual, transparent, and timely reporting and expanded the agency’s Spanish-language communications with the creation of new social media channels and a new Civilian PIO position. Donelan spent more… 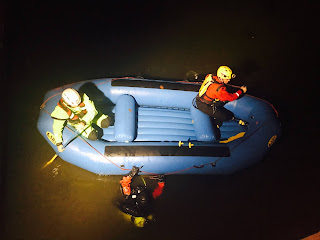 On Sunday, September 13th, at approximately 11:02 pm, Prince George’s County Fire/EMS crews were alerted to a possible drowning at Lake Artemesia in the 8200 block of 55th Ave in College Park. First arriving units were advised that an adult male had entered the water and did not resurface. The male was last seen at 9:45 pm. Resources from the PGFD including water rescue specialists were assisted by the United States Park Police Aviation section as well as the dive rescue team from the Anne Arundel County Fire Department.  After an extensive search lasting several hours, the adult male was located by divers and evaluated by medics on scene. Unfortunately, he was declared deceased on scene. Approximately 25 personnel operated for more than three hours at the lake.
All media inquiries referring to the identity of the deceased or the circumstances surrounding this incident are being handled by Prince George's County Police.