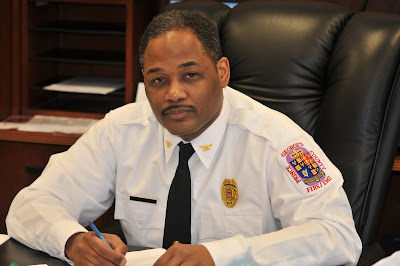 Prince George’s County Executive Jack Johnson named Eugene A. Jones, a retired Fire/EMS Department Major, as Acting Fire Chief. Eugene Jones will take over the top spot of one of the largest and busiest combination, career and volunteer, Fire/EMS Departments in the Country. His appointment was effective February 9, 2009. The position became available with the announcement that Lawrence H. Sedgwick Jr. was retiring.
“Eugene Jones has a wealth of experience working in several capacities throughout the Fire/EMS Department and the Office of Homeland Security,” said Vernon Herron, Public Safety Director. “He is currently working on the emergency response plan for all first responders in Prince George’s County. He has tremendous leadership skills and will maintain the high caliber of services our residents have grown to expect.”

Jones, of Beltsville, has 25 years of fire service experience and has a proven record of emergency management and homeland security experience. He will continue to work on projects he was involved with as the Exercise and Training Officer of the Office of Homeland Security. He also served as a Major in the Fire/EMS Department’s Office of Professional Standards and Office of Emergency Management and has more than 10 years of experience as a mediator.

Prince George’s County is located in the state of Maryland immediately north, east and south of our nation’s capital. As of 2007, according to U. S. Census Bureau estimates, it had a population of 828,770 and is the wealthiest county in the nation with an African-American majority. It is part of the Baltimore-Washington Metropolitan Area, with its county seat in Upper Marlboro. It is home to the University of Maryland at College Park; Bowie Baysox, “Class AA” affiliate of the Baltimore Orioles; NASA Goddard Space Flight Center in Greenbelt; Andrews Air Force Base, which houses Air Force One; National Harbor Complex; and Fed Ex Field, home of the NFL’s Washington Redskins. In June of 2008, Prince George’s County received Standard & Poor’s AAA rating which, according to county officials, makes it one of 48 counties in the United States to receive such a rating.

The Prince George's County Fire/EMS Department, under the leadership of Acting Fire Chief Eugene A. Jones, is one of the busiest combination career and volunteer systems in the nation. It consists of 45 fire/rescue facilities and operates under a Charter form of government established in 1970. The Department has a complement of 750 career firefighter/medics, 1100 volunteer firefighters and 80 civilian personnel. Annually, approximately 130,000 calls for assistance are placed by county citizens and residents. Seventy-five percent of those calls are requests for emergency medical services.

Posted by PGFD at 10:06 AM No comments: Links to this post

I Predict a Busy Weekend for PGFD

The men and women of one of the largest combined; career, volunteer and civilian, Fire/Emergency Medical Services (EMS) Department’s in the Country will do our part to remind citizens and residents of an important event this weekend.

Firefighters, EMT’s, paramedics and civilian members of the Prince George’s County Fire/EMS Department will be out in force this weekend to remind everyone that when we adjust our clocks forward for Daylight Saving Time on Sunday, March 8, 2009, it is also an excellent time to change the batteries in smoke alarms and carbon monoxide (CO) detectors as well.

Commuters using METRO Stations on Friday morning, March 6, 2009, may be greeted by members of the Department with a reminder that when you Change your Clock – Change Your Battery. Members will also visit communities throughout Prince George’s County over the weekend with an offer to check smoke alarms and if needed; install fresh batteries or a new smoke alarm.

Citizens and residents need not wait for a visit, they may call our Livable Communities Smoke Alarm Hotline at 301-864-SAFE (7233) and make arrangements for a member to visit your home and install a smoke alarm or fresh battery, free of charge.
Posted by PGFD at 9:03 AM No comments: Links to this post