Tribute to a Friend That Perished in a Home Fire

Someone near and dear to Rosy Dorffner’s heart  perished in a Cheverly house fire on March 31, 2013.  Sadly, a fire claimed the life of her longtime fellow club member and friend, Stephanie Syslo, in a home that was not protected by working smoke alarms.  In the aftermath of the tragedy, she had been angst-ridden over finding a way to memorialize her friend.  When she learned of the Prince George’s County Fire/Emergency Medical Services (EMS) Department’s Safety First Smoke Alarm Program, Rosy knew she had her answer.

Through the Fire/EMS Department’s smoke alarm program, Prince George’s County residents can request a free smoke alarm.  Upon receiving a request, a firefighter schedules a visit to the home and installs the device at no cost to the resident.   Additionally, within 24 hours after a significant fire or fire-related incident involving death or serious injury, firefighters are out canvassing the community where the incident occurred.  They go door-to-door, asking to check smoke alarms and providing as much information as possible about the incident.  The program, Post Incident Neighborhood Intervention Program (PINIP), is an effective community outreach effort that produces both positive interaction and public education.  We find that residents are more apt to allow firefighters into their homes to conduct a smoke alarm check and safety inspection following a fire-related tragedy.  The interaction between the Fire/EMS Department and the community also serves to quell potential rumors about what has occurred.

Rosy and her fellow Star Trek Association of Towson members felt that donating money toward the purchase of smoke alarms for the Fire/EMS Department’s program would be an excellent way to pay tribute to their friend.  The group collected nearly $250, which will greatly assist in the Department’s efforts to ensure that every home in Prince George’s County is protected by working smoke alarms.  Firefighters are planning a door-to-door campaign in the community where Rosy’s friend lost her life.

Rosy’s idea to honor her friend by contributing to the prevention of death and serious injury that too often occurs in fire-related incidents could not have been more fitting.  In the event of a home fire, the donated smoke alarms will provide an early warning that will afford a few precious moments for the occupants to “get out alive.”

On behalf of the men and women of the Fire/EMS Department and the residents of Prince George’s County, thank you Rosy and the members of the Star Trek Association of Towson for your contribution.

Posted by PGFD at 5:30 AM No comments: Links to this post

At around 10:40 pm, Thursday, December 5, firefighters from the Laurel area were alerted to a building fire.  County Deputy Fire Chief Scott K. Hoglander arrived on the scene along with the first arriving engine and advised of a working fire at the Laurel Asphalt Plant located at 5401 Van Dusen Road.  It appeared that 2 large hazardous materials containers were involved or being directly impinged upon by the flames.  A hazardous materials assignment was immediately requested.  One of the haz mat tanks was soon identified as containing diesel fuel which is not an immediate concern during this type of operation.

This area is a fairly remote heavy industrial plants with no homes or civilians in harms way.  Because this is a known non-hydrant area, Public Safety Communications dispatched water tankers and apparatus with large diameter hose on the initial assignment saving valuable time in establishing an adequate water supply.  Firefighters hooked up to a hydrant at the Fairland Aquatics Center on Old Gunpowder Road and laid over a thousand feet of hose about half-a-mile to other units on location of the fire.

One of the units initially dispatched was a tanker/foam unit from Scaggsville, Howard County Station 11.  This unit played a integral role in providing multiple extinguishing agents to knock down the bulk of all visible fire.

Once the bulk of the fire was extinguished by the water/foam tanker, firefighters moved into position to ensure the fire was completely extinguished.  Hazardous material crews started to control the run off of petroleum products as well as asphalt materials from the fire area.

It appears the fire involved vehicles typically used in the production and transport of asphalt products.  A building that contained a conveyor belt was also on fire.  The exact extent of fire damage is still being evaluated.

As of midnight, no one has been injured and the cause of the fire is under investigation.  Fire loss estimates will be tabulated and will not available until Friday morning.  There were 52 firefighters, haz mat personnel and incident commanders on location.  Another 25 firefighters staged nearby in the event they were needed.

At 12:15 am, Friday, the fire was declared out.  Hazardous material personnel continued to control the run off and conducted a search of the production plant to ensure there were no additional hazards.

The following images were captured by a media helicopter and posted on the WUSA TV 9 website.  To view their entire slide show click here. 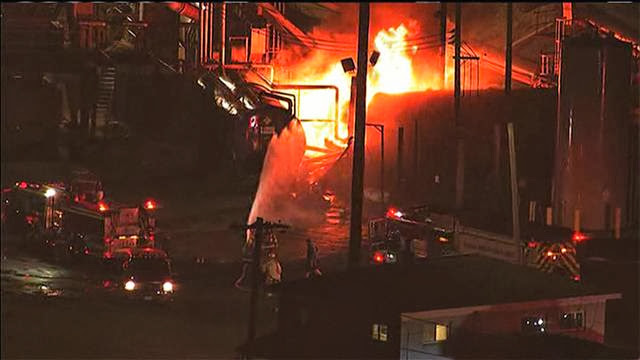 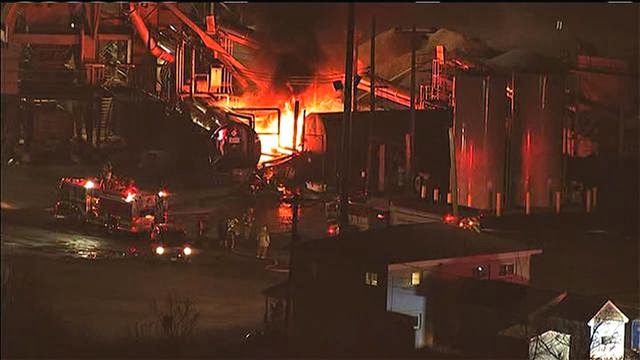 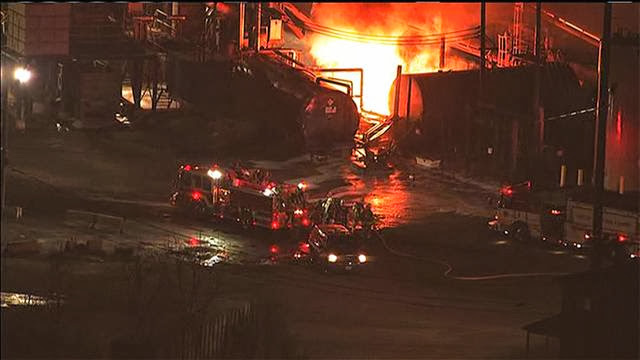 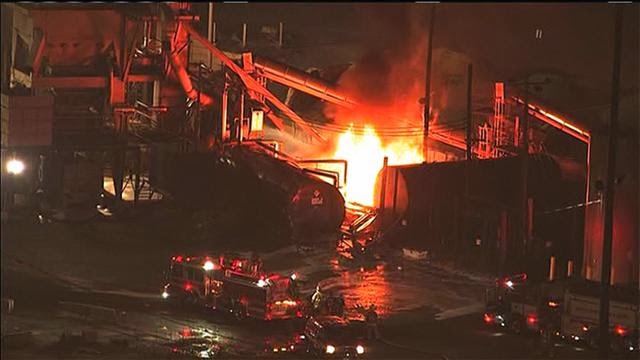 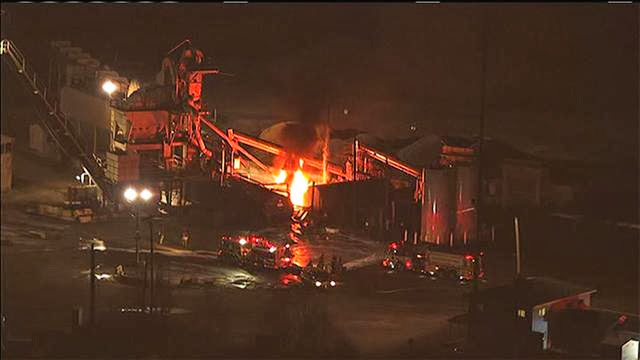 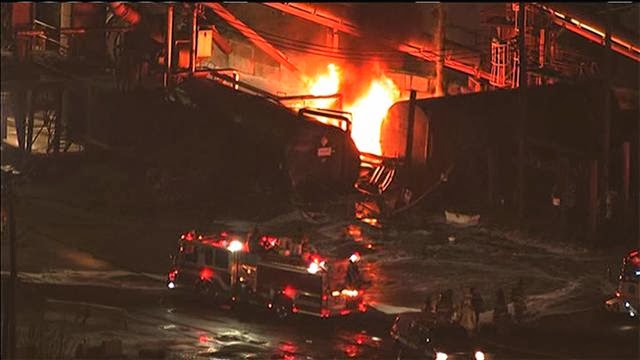 Posted by PGFD at 12:30 AM No comments: Links to this post