A Laurel toddler is in critical condition after a near drowning at her home. Firefighter/EMT's from Laurel Fire Department and a Paramedic unit from Howard County responded to the home in the 1000 block of 10th Street at around 7:15 pm this evening.

Family members, assisted with instruction from a 911 call-taker, performed CPR on the child after she was found under water in the bathtub.

Medics provided pre-hospital emergency care to the child and transported her to a nearby hospital.

The child remains in critical condition at the hospital. The City of Laurel Police Department is investigating the circumstances surrounding the incident.

No further details are available.

Posted by PGFD at 8:51 PM No comments: Links to this post 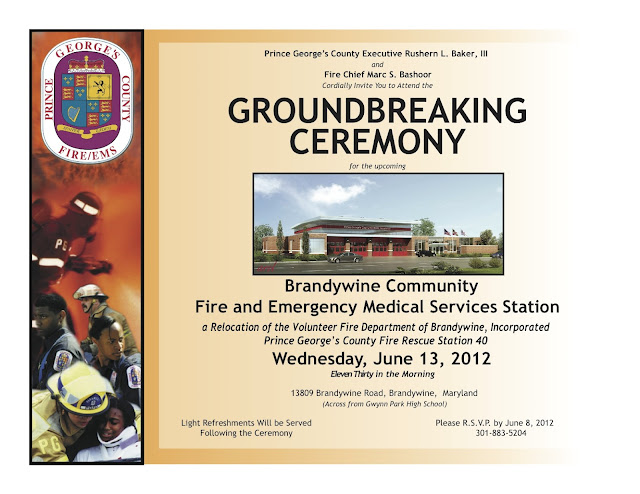 Posted by PGFD at 4:56 PM No comments: Links to this post

"Arson Awareness Week" Near Miss Report of the Week

This week, May 6-12, is Arson Awareness Week. According to NFPA, an estimated 306,300 intentionally set fires have been reported from 2005-2009. 53,700 fires were structure fires. 23,400 fires were vehicle fires. The remaining 229,200 fires were outside or unclassified fires. 440 civilians died and 1360 were injured. Firefighter fatalities attributed to arson include the very high profile 2006 Esperanza Fire (5 firefighter fatalities) and other more recent incidents in Asheville, Decatur County, Detroit, and Worcester. This week's ROTW looks at one near miss in an arson fire that reminds us the hazards we face may be intentionally set. "...We arrived on the scene of a single story vacant house with fire coming from Sides B and C. I pulled the hoseline to the door while the forcible entry man and my lieutenant made entry. The front door had been barricaded and was extremely difficult to open. I was able to squeeze in through a small opening while the others continued to open the door the rest of the way. I proceeded down the hallway, knocked down one room, and proceeded to the next. As I knocked down the hall and went into the next room, I went through a hole that was cut in the floor and was caught on a floor joist. Still having the hoseline, I was able to hold on but was sliding slowly into the basement with fire coming up under me...In this incident, we had a vacant house with no threat to civilian life. When forcing entry it should have been noticed that it was an arson fire due to the door being barricaded. Learning about the measures that arsonists will take, we should have known that holes, etc. are a possibility." There are a number of things arsonists care about; destroying property, collecting money and killing people. In plain language, arsonists don't care about firefighters. Therefore, when we approach structure fires (particularly vacant structures) where arson may be the cause, we are well advised to exercise additional risk assessment before committing resources. Once you have read the entire account of Report 06-231, consider the following: How many fires have you responded to that were classified as "arson" or "incendiary"? What are the laws in your jurisdiction regarding arson? At your last vacant structure fire, did the thought of arson cross anyone's mind? If yes, did that thought change the way the fire was fought? What is the current status of the last vacant structure fire your department "saved"? List five hazards associated with fighting fires that were intentionally set.   The hazards of fighting structure fires to save lives and savable property are a given and understood in our profession. When fires are intentionally set, particularly in abandoned and vacant structures, we must use a risk versus benefit analysis before entering the structure. Is the risk we are exposing ourselves to worth the potential hazard involved with entering? The next intentionally set fire in your community is an unknown. Being alert for signs of unusual, intense burning and specific occupancy indicators (e.g., structure boarded up and difficult to enter) will help you decide if the vacant structure you are facing is worth putting you and your crew at maximum risk for Have you experienced a near miss at a vacant structure fire? Submit your report to www.firefighternearmiss.com today so everyone goes home tomorrow. Note: The questions posed by the reviewers are designed to generate discussion and thought in the name of promoting firefighter safety. They are not intended to pass judgment on the actions and performance of individuals in the reports. National Fire Fighter Near-Miss Reporting System 4025 Fair Ridge Drive Fairfax, VA 22033 P: 571-238-8287 F: 703-273-0920 info@firefighternearmiss.com www.firefighternearmiss.com Firefighternearmiss.com is funded by a grant from the U.S. Department of Homeland Security's Assistance to Firefighters Grant program. Founding dollars were also provided by Fireman's Fund Insurance Company. The project is managed by the International Association of Fire Chiefs and supported by FireFighterCloseCalls.com in mutual dedication to firefighter safety and survival. To sign up to receive the Near-Miss Report of the Week by email, unsubscribe or change your mail preferences, e-mail kameen@iafc.org.
Posted by PGFD at 12:29 PM No comments: Links to this post