At about 4:30 pm today Prince George's County Firefighters and Paramedics were alerted to a possible water rescue involving a paddle boat at the National Harbor in Oxon Hill MD.

A family of 4 occupied a rented paddle boat in the Potomac when a strong wind pushed them into a shallow rocky area of the Potomac not far from the shore line. It does not appear the boat overturned but all four occupants ended up in the water after making contact with the rocks. The occupants were assisted by other boaters and bystanders in reaching the shore. One of the boaters, a female in her 20's, could not make it over the retaining wall due to lower body injuries and was assisted out of the water by firefighters and paramedics.

All four family members will be transported to an area hospital for evaluation. The grandmother, 50ish female, was experiencing trouble breathing, a 20ish female with lower body injuries and her two young daughters, ages 1 and 4, for possible hypothermia.

All appeared to be in good condition. Firefighters and paramedics were clear the scene at about 5:10 pm.
In addition to firefighters/medics and rescue boats from the Marine division the Coast Guard and Alexandria had their rescue boats in the area as well.


Posted by PGFD at 5:23 PM No comments: Links to this post

3 Teens Rescued from Swift Moving Waters of the Northwest Branch

On a day when storms rolled through Prince George’s County with heavy rains, high winds and threats of tornado's, the Fire/EMS Department Technical Services Team was kept busy.  The team handles complex rescues involving collapse, confined space, high angle and swift water.  The teams had to utilize two of those skills while performing the rescue of three teen-aged males from the swollen and swift moving Northwest Branch waterway.

Sometime after 7:00 pm several residents of the Mount Rainier and Brentwood Community came outdoors during a break in the storms.  The power of Mother Nature was evident near the 38th Street Bridge in Mount Rainier.  One resident saw three teen aged males walking near the shoreline.  She turned away for just a moment and when she looked back she saw them in the water frantically attempting to make their way back to the safety of the shore.  They didn’t stand a chance swimming in the swift moving water and were carried downstream.  They passed a concrete bridge support and each one was able to grab onto and climb on to the wide base.  They became stranded and trapped with the water level continuing to rise.  The witness called 911 and a response of Fire/EMS Units from Bunker Hill, Hyattsville and Chillum responded to the scene as well as the Departments Technical Services Team and rescue boats from the Laurel Volunteer Rescue Squad and Marine Division.  Firefighters worked rapidly to devise a plan to retrieve the teens.  Another thunderstorm was approaching and the water level in the Northwest Branch continued to rise.

A system of ropes and pulleys were set up with the assistance of the ladder from Hyattsville.  Firefighter Joe Ford was placed into a harness and lowered over the bridge and down about 25 feet to the water level.  He explained to the anxious teens how the rescue would work; the teens would be raised to the top of the bridge one at a time.  Once on the bridge level they were treated for hypothermia by medics.  All three were removed at about 8:20 pm and transported to a hospital in good condition.

The successful outcome of this incident was a result of coordination and teamwork by all personnel on the scene.  Incident Commanders, firefighters, EMT’s, Paramedics, Technical Services and Marine Division personnel, both volunteer, career and civilian, worked cohesively to bring this potentially tragic incident to a extremely positive outcome.

The video was taken by William "Hawk" Hawkins, Fire Chiefs Aide and is provided courtesy of the Prince George's County Fire/EMS Department.

The still images are by Mark E. Brady, PGFD PIO. 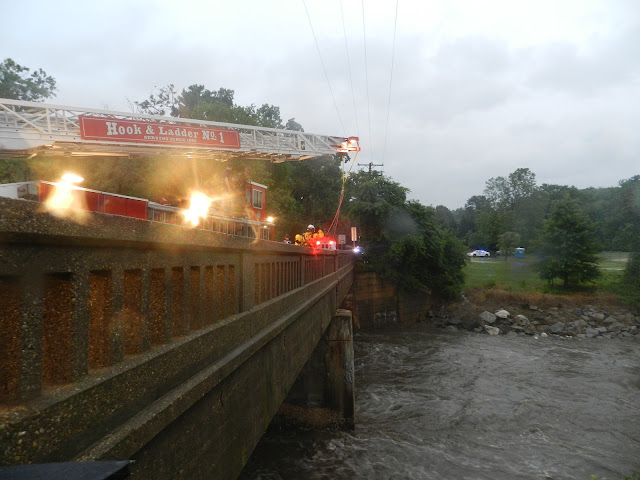 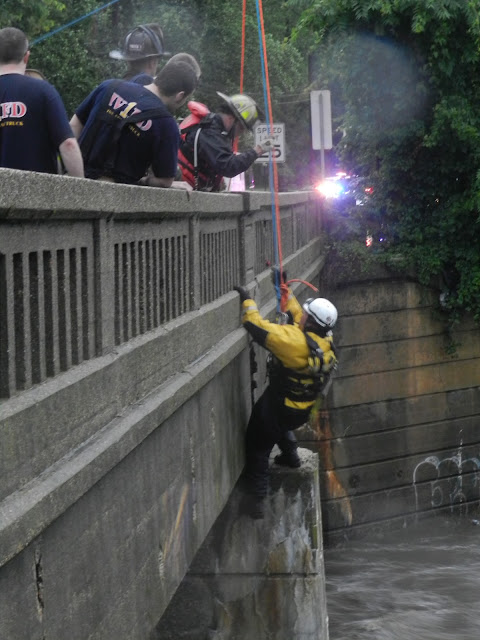 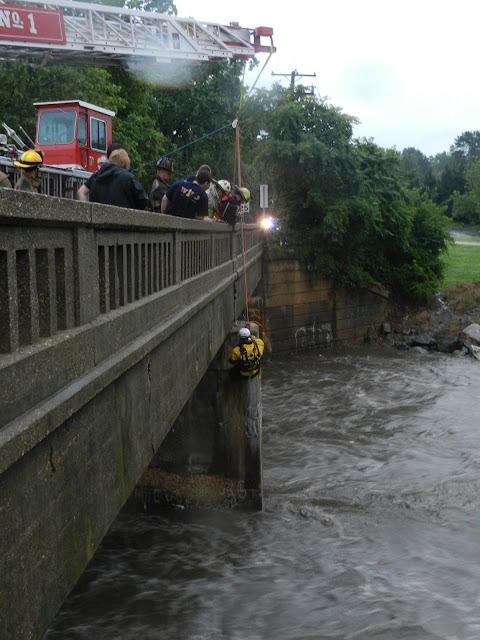 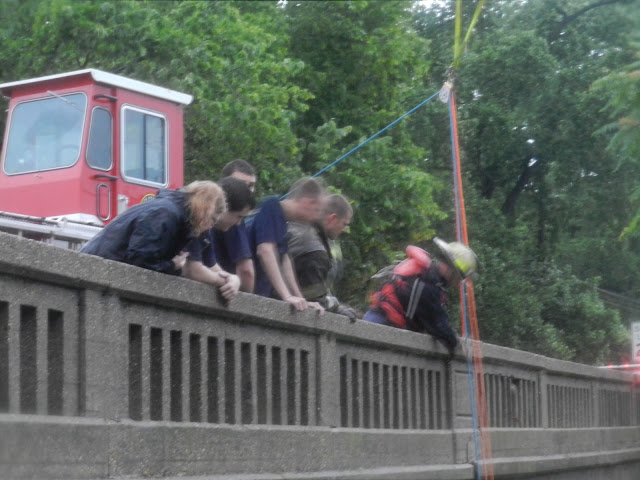 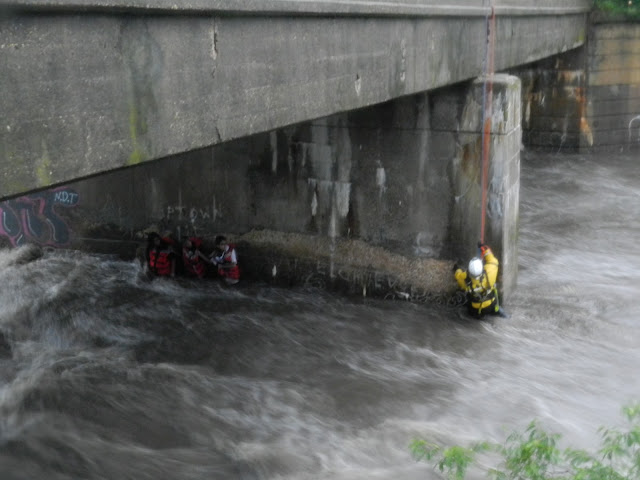 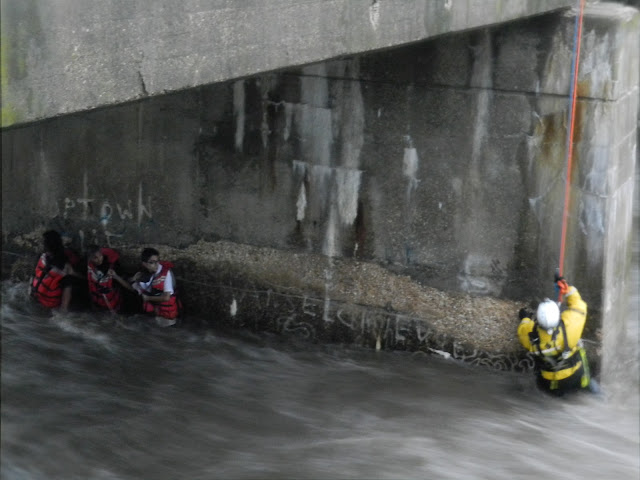 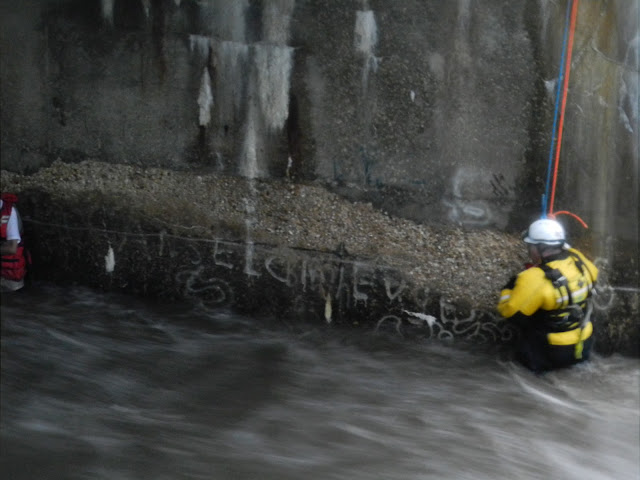 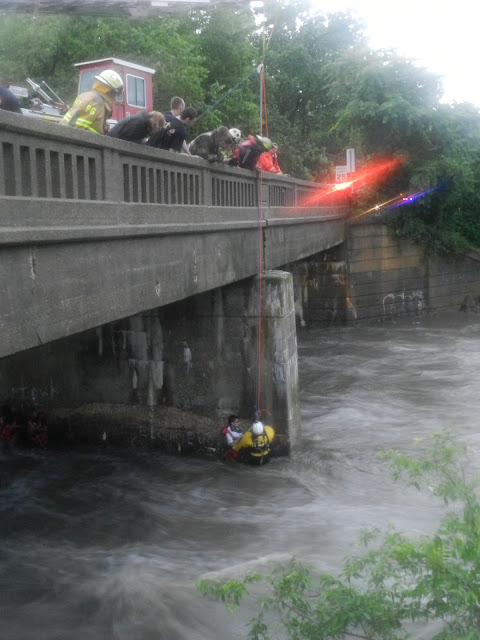 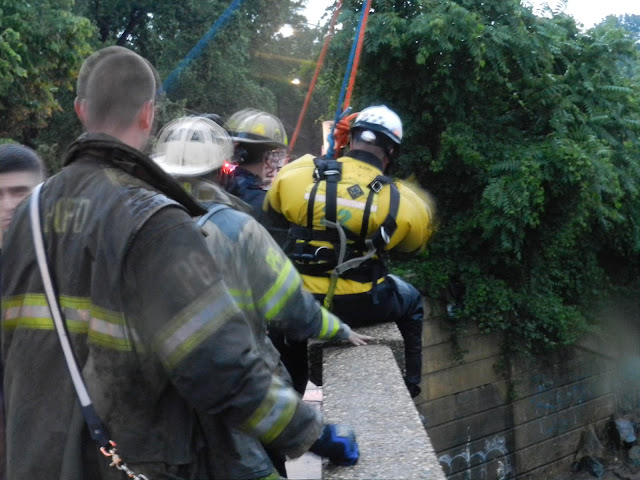 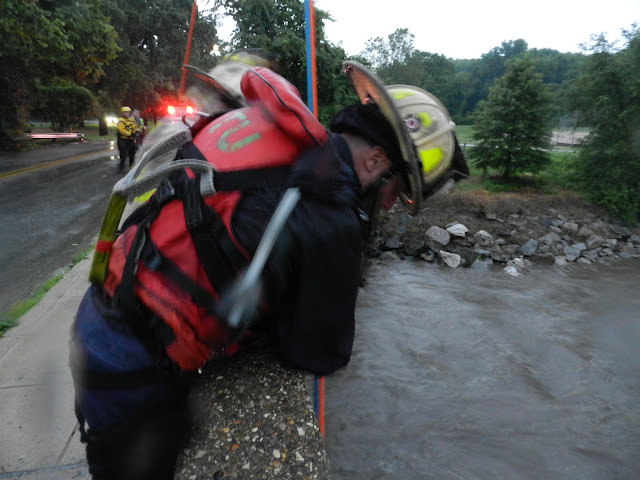 Posted by PGFD at 12:27 AM No comments: Links to this post