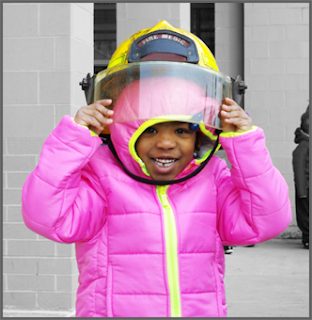 You can make a difference in the lives of children by supporting the Prince George's County Professional Firefighters & Paramedics Association "Operation Warm" program.
Children will be able to go to school on cold winter days. They will feel special in their very own brand new coat...maybe their first new coat ever. And with our American-Made coats, you'll be supporting American jobs too.

Without this program, many local children will be left out in the cold. With your support, many will be happy and warm. Please help a child in need!
To contribute to the IAFF Local 1619 OPERATION WARM Program, click here.

Posted by PGFD at 5:58 PM No comments: Links to this post 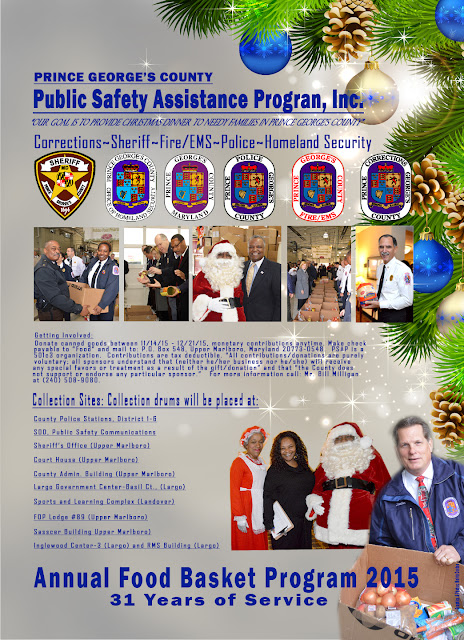 Posted by PGFD at 5:34 PM No comments: Links to this post

A carbon monoxide (CO) alarm is credited with alerting a Capitol heights grandmother of unhealthy air in her house, however, she had already started to fill the effects of the "Silent Killer."  Firefighters and Medics were alerted to a sounding alarm with a female occupant on the floor not able to stand up just before 3:00 pm today.  When firefighters from Capitol Heights first arrived on the scene at the single-family home in the 4100 block of Ellis Street no one answered knocks on the door.  Firefighters quickly made entry into the house and located a female occupant lying on the floor.  She was conscious but not alert.  Firefighters removed her and her dog to the homes exterior where her condition immediately started to improve.  The dog was provided to other family members that arrived on the scene.  The adult female was transported by medics to a local hospital suffering from CO exposure, she was in "fair" condition.

Firefighters used gas meters and found a reading of 24 parts per million (ppm) of CO inside the homes atmosphere.  A reading of 30 ppm is considered to unhealthy, however, longer exposures at a lower ppm level will still sicken a person, especially younger children and older adults.

A CO detector continually takes air samples.  When it detects a level for an extended period of time it will sound an audible alert.  When the alert sounded the female called other family members for help, which eventually led to a 911 call and Fire/EMS response.  If not for the detector sounding a warning, the home occupant, already sickened from CO exposure, on the ground and unable to get up, would have only gotten sicker to the point of unconsciousness and perhaps death.

Firefighters discovered the occupant was using her oven to warm the house due to her furnace not working.

Carbon monoxide is called the “Silent Killer” by firefighters and medics because you cannot smell, see or taste the toxic gas.  With CO going undetected, home occupants will start to feel sick with flu like symptoms.  The higher the level of CO the shorter amount of time it takes to start making people sick.  CO is a by-product of fossil fuel combustion and can be problematic when over combustion occurs at the appliance or when CO is not properly vented outside.

The only way homeowners can detect the presence of unhealthy CO in their home is to purchase and install a carbon monoxide detector.  County law currently requires a working CO detector on every level of your home, primarily, just outside of sleeping areas.  This law also applies to all apartments, condos, hotels, motels and dormitories in Prince George's County.

The Fire/EMS Department highly recommends the purchase of 10-year, tamper proof, with hush feature detector that can be purchased at home improvement and hardware stores.  Test your smoke alarm and CO detector on the first day of every month to ensure they are working.  CO detectors have an active life of about 7 years and should be upgraded to a 10-year detector as soon as possible.

Homeowners and property managers should use this relatively warm weather for this time of year to contact a Heating/Ventilation/Air Conditioning (HVAC) technician to inspect heating devices and ventilation pipes.   Some HVAC Companies offer a reduced price for inspections this time of year.  Certified technicians will inspect gas-fueled furnaces, stoves, fireplaces and water heaters to ensure the combustion process is occurring within normal limits and that all flu and ventilation pipes are in tact and not clogged.
Posted by PGFD at 5:18 PM No comments: Links to this post

The Prince George’s County Fire/Emergency Medical Services (EMS) Department offers the following safety tips, to ensure that all citizens and residents will enjoy a safe and festive Thanksgiving holiday. Unfortunately, fire safety and injury prevention guidelines are often overlooked during the holidays. Prince George's County Fire Chief Marc S. Bashoor stated, "Everyone needs to keep Safety First and by doing so our citizens, visitors and businesses can avoid tragedy and disruption of their holiday festivities."

If your Thanksgiving plans include a Turkey Fryer, this is another whole story by itself, click here for Turkey Fryer Safety Tips.

These safety tips work for every day of the year, however, home fires increase dramatically, twice as many, on Thanksgiving Day.  While these safety and cooking tips may not make Thanksgiving dinner taste any better--they will help to avoid potential disaster;

•    Overnight guests should be instructed on your exit drill from the home and designated meeting place for your family.  Sleep with bedroom doors closed.

•    Have a fire extinguisher available not more than 10 feet from the stove, on the exit side of the room.

•    A standard Class ABC multi-purpose dry chemical extinguisher is recommended. Know how to use your fire extinguisher.

•    Start holiday cooking with a clean stove and oven.

•    Keep the kitchen off limits to young children and adults who are not helping with food preparations. This will lessen the possibility of kitchen mishaps.

•    When cooking, do not wear clothing with loose sleeves or dangling jewelry. Clothing can catch on fire and jewelry can become entangled with pot handles, causing spills and burns.

•    Cook on the back burners when possible, and turn pot handles inward so they don’t extend over the edge of the stove.

•    Never leave cooking unattended. If you must leave the kitchen while cooking, turn off the stove or have someone else watch what is being cooked. Unattended cooking is the number one cause of home fires and fire-related injuries in Prince George’s County.  According to the USFA; cooking is the leading cause of all Thanksgiving Day fires in residential buildings at 69 percent. Nearly all of these cooking fires (97 percent) are small, confined fires with limited damage.

•    If you use a deep fryer, please, exercise extreme caution and follow manufacturer instructions.  The report from the USFA found that these cooking devices accounted for about 1% of Thanksgiving Day fires.

•    Keep Thanksgiving decorations and kitchen clutter away from sources of direct heat.

•    Candles are often part of holiday decorations. The Fire/EMS Department strongly encourages the use of battery powered candles and discourages the use of candles with an open flame.  If you use candles; they should never be left burning when you are away from home, or after going to bed. Candles should be placed where children will not be tempted to play with them, and where guests will not accidentally brush against them. The candleholder should be completely non-combustible and difficult to knock over. The candle should not have combustible decorations around it.

•    If smoking is allowed inside, provide guests with large, deep ashtrays and check them frequently. After guests leave check inside, under upholstery, and in trash cans for cigarette butts that may be smoldering.

•    10-year smoke alarms are required on every level of your home, in hallways just outside of sleeping areas and in every bedroom.  Sleep with your bedroom door closed and test smoke alarms on the Safety First Day of every month.


Working smoke alarms are required in all residences in Prince George's County.  Consider upgrading to a 10-year tamper proof with hush feature smoke alarm and never change a battery again.  If you can not afford to purchase an alarm you can call 311.  A firefighter will install a working smoke alarm in your home; free of charge.

The men and women; volunteer, civilian and paid, of the Prince George's County Fire/EMS Department wish everyone a Happy and Safe Thanksgiving!!!
Posted by PGFD at 9:20 AM No comments: Links to this post