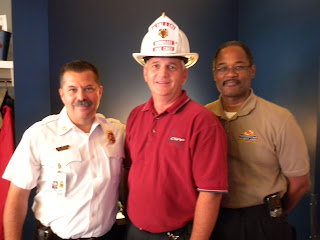 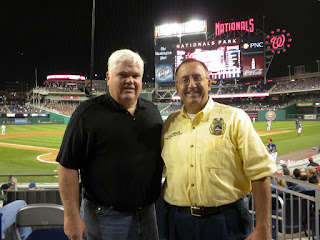 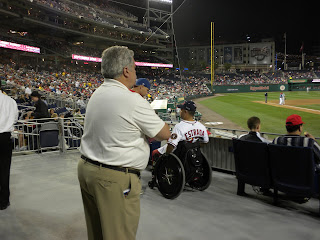 Several members of the Prince George’s County Fire/EMS Department attended the Washington Nationals game at National Park on Thursday, September 10, 2009. The game and festivities were part of Firefighter Appreciation Night and included special tributes to 9-11-01. The PGFD contingent would like to extend our thanks to Pete Pedersen of PEPCO and Steve Kerber of College Park Fire/EMS Station 812 and a member of the UL team for their genoristy and hospitality.

Fire Chief Jones was on hand to assist District of Columbia Fire Chief Dennis Rubin make a special presentation. Fire Chief Rubin presented Pete Pedersen with a fire helmet and proclaimed him an Honorary Fire Chief. Pete is a PEPCO Senior Distribution Analyst and coordinator of the Emergency Services Partnership Program (ESPP) and has worked endlessly on developing relationships with area public safety agencies. The ESPP has been one of the main contributors of smoke alarms over the past five years in addition to developing public service announcements and videos promoting firefighter safety.

Steve Kerber is a long-time volunteer member and Chief Officer from College Park Fire/EMS Station #812. He formerly worked with NIST and now is a Research Engineer with Underwriters Laboratory (UL). Steve and his team from UL invited dozens of area firefighters to a game time reception in the Presidents Club at National Park.

Again, our thanks and gratitude to our hosts and to the Nats for winning the game!!!
Posted by PGFD at 3:55 PM No comments: Links to this post 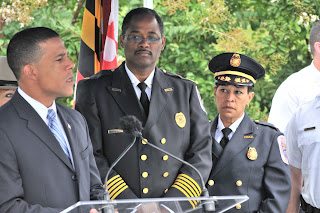 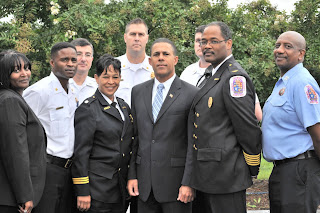 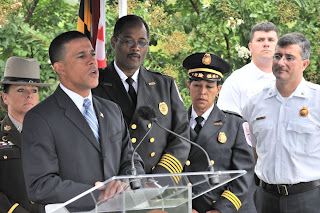 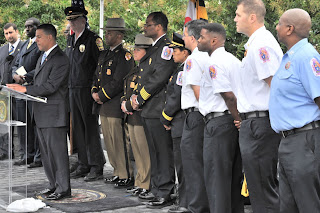 Nearly 3-dozen members of the Prince George’s County Fire/EMS Department joined Maryland’s Lieutenant Governor to remember the lives lost on September 11, 2001. The event was sponsored by the Port Towns and held at the memorial constructed at the Peace Cross in Bladensburg. This memorial honors the 23 citizens of Prince George’s County, Maryland that died that morning. Maryland’s Lt. Governor Anthony Brown led the ceremony and thanked the members of public safety and the municipal leaders for joining him to remember the tragic events that affected our country and claimed nearly 3,000 lives. Lt. Gov. Brown read each name of those Prince Georgians memorialized at that site. The Fire/EMS Department participated with nearly 3-dozen career and volunteer members of the Department including Fire Chief Eugene Jones, Lt Col Peden and Stagnaro, members of the Chiefs staff, and firefighters from nearby Bunker Hill, Bladensburg and Riverdale Fire/EMS Stations.
Posted by PGFD at 11:27 AM No comments: Links to this post

Email ThisBlogThis!Share to TwitterShare to FacebookShare to Pinterest
Labels: 9/11, pgfd

Prince George’s County Police Officers responding to an activated alarm at a commercial warehouse in Capitol Heights arrived to find that an explosion had occurred. At about 11:15 PM, Thursday, September 10, 2009, Firefighters and the Hazardous Materials Team responded to the TASCO Water Works at 9209 Hampton Overlook, a 1-story commercial establishment in a row of similar warehouses. The front window and two large rolling overhead doors on the rear of the building were blown out and several drums of hazardous materials were found outside of the structure with haz-mat product being exposed and released. There were no injuries and no evacuations were necessary, however, two nearby occupied establishments were told to shelter-in-place and close all windows and doors.

Hazardous Materials crews continue their work in identifying and stabilizing the chemical products and their work will continue into this morning. It is not known at this time what caused the explosion and how many different chemicals are involved.

Firefighters anticipate there will be minimal disruption with traffic flow as this location is located at the end of a cul-de-sac.

Posted by PGFD at 4:43 AM No comments: Links to this post