The Hogs and Heroes Foundation in cooperation with the Branchville Volunteer Fire Department, Queen Anne’s County Sheriff’s Office and Sunset Cycles announce a Hurricane Florence relief effort to aid Law Enforcement Agencies, Firefighters and Emergency Medical Workers in areas affected by the hurricane. The Hogs and Heroes Foundation will be collecting bottled water, clothes and dry goods at designated collection centers from Friday, September 14th through Saturday, September 22nd All items collected will then be delivered to areas affected by the hurricane.

Representatives will be available for comment/interview upon request.


On Wednesday, June 13, 2018, the ambulance from Laurel Volunteer Rescue Squad, Inc. responded for a car crash on the Beltway in the College Park/Beltsville area. On arrival, Lt. Globerman noticed several bystanders looking toward the overpass and pointing to an adult female standing on the bridge edge of the guardrail.


Globerman's partner remained with the crash victim who had suffered only minor injuries, while he proceeded to the distressed female’s location. After reaching her, he radioed for police assistance and requested the Rescue Squad from St. Joseph’s Fire/EMS Station 806 to provide barrier protection.


Globerman and an unidentified bystander approached the female, now with her shirt pulled over her head and appearing ready to jump.  His attempts to engage her in conversation proved futile, as she repeatedly stated that she must wait until 5:00 P.M. Globerman persuaded her to let him move her to safety and then escorted her to an ambulance from Calverton and the waiting Maryland State Police. The patient was transported to an area hospital for psychiatric evaluation, and he returned to his ambulance to complete transport of the crash victim.

"Your quick thinking and immediate action you displayed on the scene of this incident, which prevented a potential tragedy, are commendable and worthy of recognition," said Fire Chief Barksdale while making the presentation.  "Therefore, you are hereby awarded a Fire/EMS Department Emergency Services Award. Your actions reflect well on you personally and professionally and exemplify the excellent caliber of service we strive to provide in every circumstance." 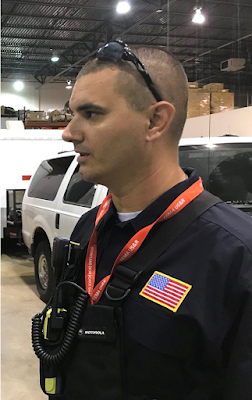 Jon Bender, a Battalion Chief with the Prince George’s County Fire/EMS Department is currently deployed for Hurricane Florence to South Carolina as part of the Urban Search and Rescue (USAR) response system coordinated by the Federal Emergency Management Agency (FEMA).  Maryland Task Force 1 (MD-TF1) is based in Montgomery County Maryland and is one of 28 federally funded national response teams.  Jon is a structural collapse specialist and is a member of the PGFD Technical Rescue Team.  We wish the team safe travels and for a safe return once the mission is completed. (Photo credit Pete Piringer from Jon’s twitter)

Posted by PGFD at 10:04 AM No comments: Links to this post