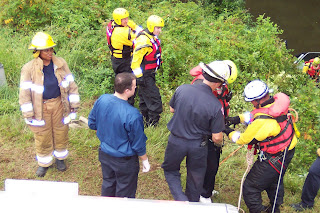 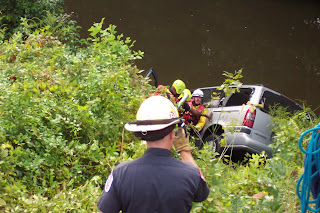 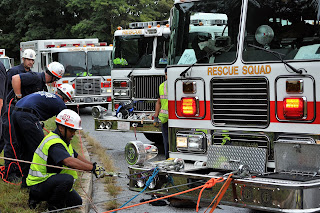 Prince George’s County Firefighters effected the rescue of a man from an extremely unstable situation this afternoon in Largo. At about 4:30 PM, Thursday, September 17, 2009, a motorist rounded a curve on the ramp from Largo Center Drive to go west onto Central Avenue and lost control of his mini-van on the rain soaked roads. The vehicle left the roadway jumping the curb and sped down a steep 40-foot embankment. The embankment was covered with overgrown grass and shrubs which helped to slow the vehicle down. The front end of the mini-van stopped at the bottom with the front-end submerged in an overflow area of a nearby pond. The 50ish-year-old Ellicott City man remained in the vehicle fearing any movement may cause the wobbly van to fall deeper into the unknown depths of the water.

There were about 40 firefighters, paramedics, water rescue and technical rescue personnel that responded on this incident. The Technical Rescue Team (TRT) established a rescue system of ropes, pulleys and anchors. The TRT lowered firefighters, wearing safety harnesses, down the embankment. When firefighters reached the bottom they stabilized the vehicle to prevent any movement from its precarious position. Firefighters made patient contact at about 5:15 PM. The man was assessed and significant injuries were ruled out. He was placed into a safety harness, removed from the vehicle and was assisted up the hill with the rescue system that had been established.

Paramedics evaluated the man and transported him to an area hospital for treatment of pain in his leg, which the patient thought he injured while “standing on the brake” when travelling down the embankment towards the water.
Posted by PGFD at 8:11 PM No comments: Links to this post