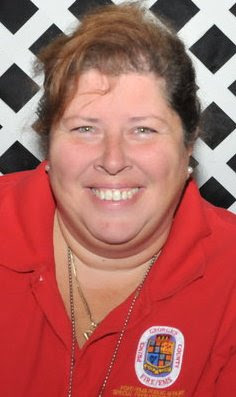 Teresa Ann Crisman, a long time volunteer and fire safety advocate, will soon take over the helm of a statewide association. Crisman will be sworn into office as President of the Maryland State Firemen’s Association Ladies Auxiliary on June 21st during the Annual Convention held in Ocean City, Maryland.  She will serve the one-year term just as she has served as a member of volunteer ladies auxiliaries in Prince George’s County; working tirelessly for the overall good of the MSFA and ladies auxiliaries across the State.  She takes over from a fellow Prince Georgian completing her year as President of MSFA Ladies Auxiliary. Sandi Lutz, a member of the Glenn Dale Fire Association, has served exceptionally well and her tenure reflects favorably on herself, Glenn Dale Fire Association and Prince George’s County.
Teresa, a resident of Greenbelt, is truly a dedicated member of the fire service family, career and volunteer, constantly advocating for injury prevention, fire prevention and fire fighter safety, She is a 10-year employee of the Fire/EMS Department, currently serving in the Office of the Fire Chief – Community Outreach and Legislative Affairs.
She oversees the Community Outreach Office, Safe Kids and Risk Watch Programs for the County. She also conducts the Fire Inspections for the Foster Care Programs for Prince George’s County Social Services.
Teresa joined the Greenbelt Volunteer Fire Department Ladies Auxiliary (GVFD-LA) in March 1981 as a junior member when she was just 13. Crisman became a Senior Member at the age of 18 and currently has 25 years of service to GVFD-LA. She has served as their Vice President, Secretary, Historian and Guard. Teresa is also a member of the Branchville Volunteer Fire Company Ladies Auxiliary, where she was awarded Life Membership in 2010.
Career and volunteer members of the Prince George’s County Fire/EMS Department have long recognized Teresa’s skills and unique manner in delivering life safety and fire prevention education. Recently, the State of Maryland has recognized her skills as well when Maryland Governor Martin O’Malley presented Teresa with the Maryland Institute for Emergency Medical Services Systems (MIEMSS) Star of Life Award to honor EMS personnel, citizens, and EMS programs statewide. In presenting the award, Governor O’Malley recognized Teresa, “for her tireless efforts in reducing injuries in children through life-safety education in Prince George’s County and across the State, including car seat checks, child passenger safety training, fire prevention school programs, and Safe Kids events.”
Teresa has been presented with numerous other awards for promoting fire prevention, including the Silver Spring Trophy for Fire Prevention Excellence in the State of Maryland for 2001 and 2004, the Jane Todd Memorial Trophy for Fire Prevention 2004 and the Joseph Chaney Award for Fire Prevention in 2006 and 2010.
Crisman was inducted into the Hall of Fame for the Ladies Auxiliary to the Prince George’s County Volunteer Fire and Rescue Association in September 2002, and is a Past President of the Ladies Auxiliary to the Prince George’s County Volunteer Fire and Rescue Association, serving in that office from 2002-2003.
Teresa’s mother, Mary Frances (Fran) Crisman, was President of the Greenbelt Ladies Auxiliary in 1966-1967 and 1970-1975, and is a Past President of the Ladies Auxiliary to the Prince George’s County Volunteer Fire and Rescue Association in 1971-1972, and a Past President of the Ladies AuxiliarytotheMarylandStateFiremen’sAssociation1990-91. Her father H. J “John” Crisman served as Volunteer Fire Chief of the Greenbelt Volunteer FireDepartmentfrom1966to1973. John retired from the Prince George’s County Fire/EMS Department with 37 years of dedicated service to the County. Other members of the family who serve PGFD include her brother, John Michael, and her Brother-in-Law, Ken Stack.  Her younger brother, James Anthony, is a Metropolitan Police Officer and Volunteer President at the Branchville Fire/EMS Station in College Park
Posted by PGFD at 9:01 PM No comments: Links to this post

The Prince George’s County Fire Commission recognized four individuals for their assistance provided during the past year.  At a meeting of Fire Commission at the Cranford-Graves Fire Services Building in Landover Hills, on Wednesday, June 15, 2011, Chairman John Alter presented a certificate of award recognizing John D. Baione, an Investigator from the Office of the Fire Marshal, for his performance in streamlining the volunteer firefighter/EMT application and background check process.  Additionally, Tanya Gott, Director and CIO of the Office of Information Technology and two members of her staff were recognized for their assistance provided to the Commission and volunteer member companies in a variety of projects over the past year.
The Fire Commission is composed of nine members elected by the volunteer fire companies. In accordance with the provisions of the County Charter, the Fire Commission must annually formulate a capital budget, Capital Improvement Program (CIP) and a current expense budget for all volunteer fire companies with respect to the expenditure of public funds. The Commission also provides operational and administrative support of Volunteer Fire Companies, including operation and maintenance of individual fire stations and equipment; and the purchase of fire suppression and rescue apparatus. Incentive programs are also implemented to recruit and retain volunteer members.
The members of the Fire Commission are:
John Alter
Chairman and At-Large Commissioner
Vince Harrison
Vice-Chairman and District 2 Commissioner
Bryan Lau
Secretary and At-Large Commissioner
Frank Underwood
District 1
Harve Woods, Sr.
District 3
Michael Mattison
District 4
Janet Demeritt
District 5
Michael Alfieri
District 6
Jon Bigony
At Large 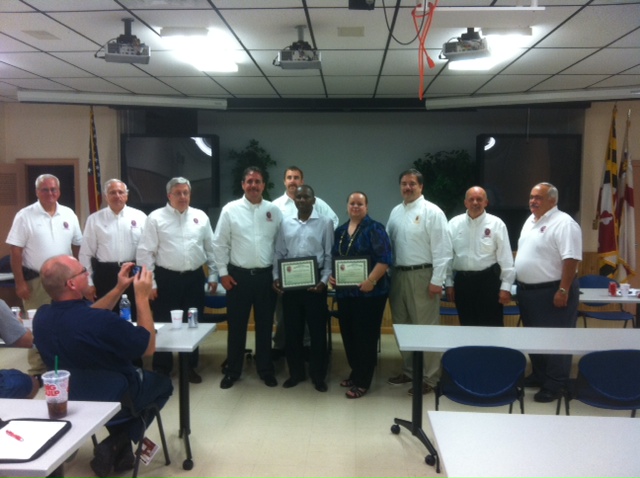 Posted by PGFD at 8:15 PM No comments: Links to this post


Career Recruit School 43 organized the run to honor fallen Volunteer Fire Fighter Mark Falkenhan, who had been a career member of the Baltimore County Fire Department from 1990 to 2006. On the evening of Wednesday, January 19, 2011, Falkenhan was a member of the crew that responded to an apartment fire. The fire was knocked, and crews moved to the second and third floors to search for possible victims. In an article by WBAL TV.com, Baltimore County Fire Chief John J. Hohman stated “A flashover occurred. One firefighter escaped successfully, while Falkenhan was injured. He was transported to the hospital, where, tragically, he succumbed to his injuries.” The 43 year-old father of two was most recently employed with the U.S. Secret Service, where he helped train agents in search and rescue techniques.


Fire/EMS Department Training Academy instructors initially became aware of the philanthropic spirit of their recruits when they donated blood for an injured firefighter. The recruits also researched and wrote a paper on cancer among firefighters, which was picked up by an established firefighter’s cancer research center. Academy instructors, learning of the recruit’s plan to run across the Woodrow Wilson Bridge, challenged them to turn their effort into a fundraiser. Each student raised at least $20 and participated in a food drive that generated over $500, totaling their earnings to $2,000.
In a ceremony that was held at the Fire/EMS Training Academy on Monday, June 13, the recruits presented the NFFF with a monetary donation, which was accepted by Volunteer Fire Fighter Falkenhan’s wife, Gladys. During the ceremony, the recruits revealed that they had purchased a brick at the National Firefighters Memorial Walk of Honor, which was inscribed “In memory of Mark Falkenhan, P.G.F.D. C.R.S. #43.” In addition, they read Mrs. Falkenhan and Cathy Hedrick, a representative from the NFFF, a letter they had written detailing what they had learned from their experience. “Through recruit school we are taught so many things not to do, but while learning about the man your husband was, we have learned what to do,” Recruit Basset read.

Career Recruit School 43’s philanthropy, hard work, and commitment to the NFFF touched everyone attending the ceremony. Their efforts prompted Gladys Falkenhan to say “As hard as it was, he died doing what he trained for all of those years.” Speaker Cathy Hedrick addressed the recruits, stating, “No other fire department has made the commitment or has been as dedicated to the National Fallen Firefighters Foundation and safety as you have.” The heartfelt presentation revealed the frightening possibilities of a career as a firefighter. It also taught the recruits how to be safe and to always remember Prince George’s County Fire/ EMS Department’s motto “Safety First! Everyone Goes Home.”

Car Crashes into Window of Commerical Building - No Injuries 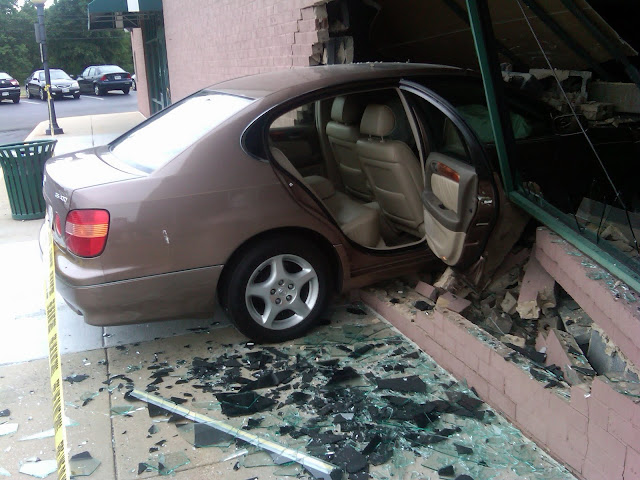 Fortunately, no one was injured when this car crashed through the front window of a commercial establishment in the 12700 block of Old Fort Road in Fort Washington, this morning at about 10:30 am..  The teen-aged female driver was evaluated by paramedics and did not require hospitalization.  Firefighters checked the structural stability and awaited the arrival of a building inspector. The Prince George's County Police Department conducted an investigation.  (Photo by PGFD Captain Christopher Hunt)
Posted by PGFD at 12:39 PM No comments: Links to this post

MEDIA CONTACT: Mark E. Brady, Chief Spokesperson, 240-508-7930
A class that instructs firefighters on trench rescue operations has been ongoing this week in Prince George’s County. Nearly 2 dozen career and volunteer members of the Fire/EMS Department are participating in this 30 hour class that will provide the student with the knowledge and skills to perform technician-level trench rescue operations. The class includes members of the Technical Rescue Team, career firefighters and volunteer firefighters from Berwyn Heights and College Park.

Upon successful completion of this course, the student will be able to function as part of an integrated trench rescue team.

All photos by Mark E. Brady 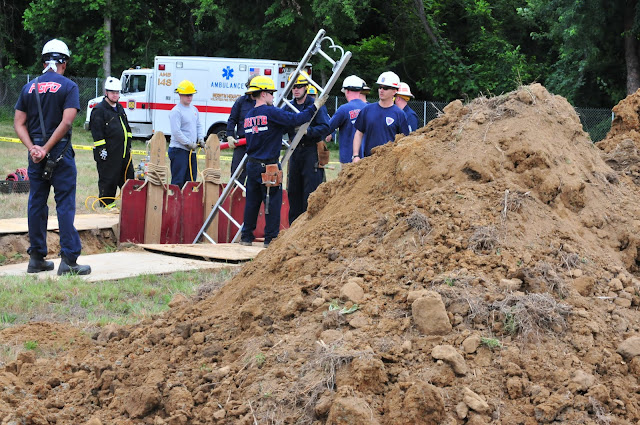 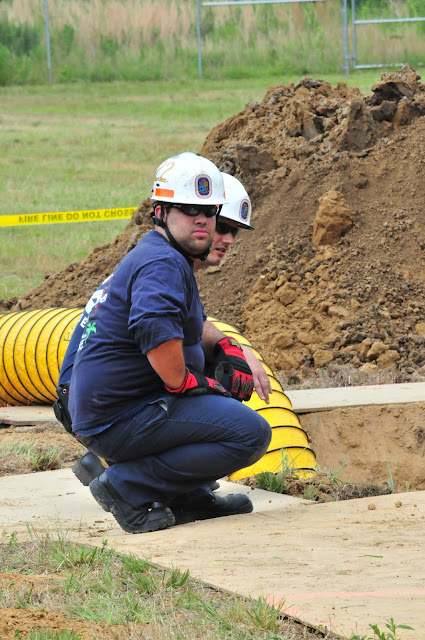 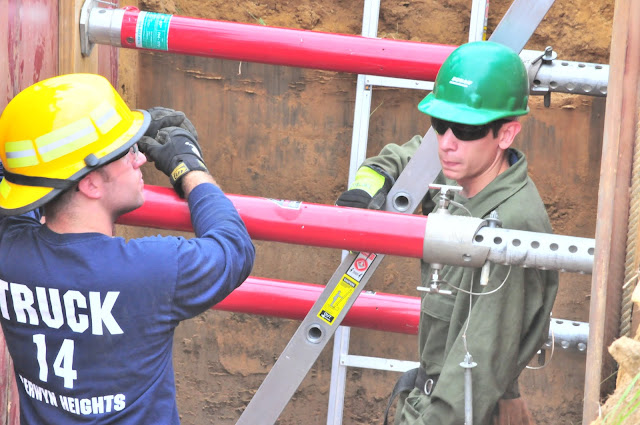 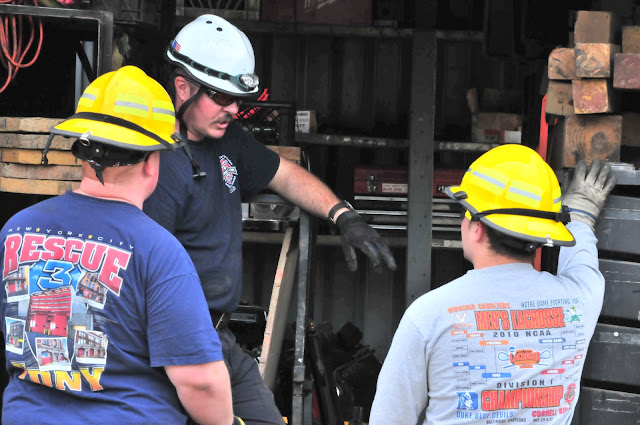 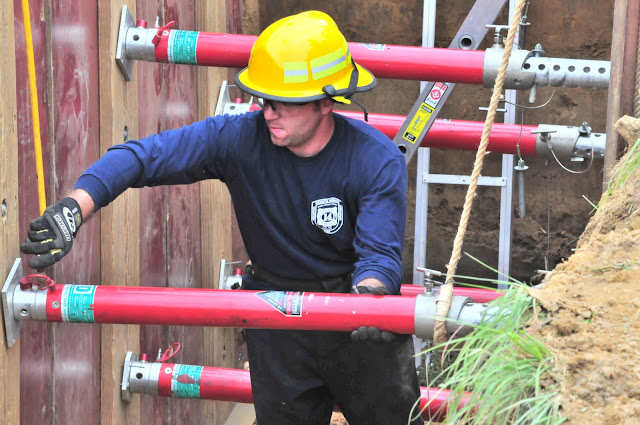 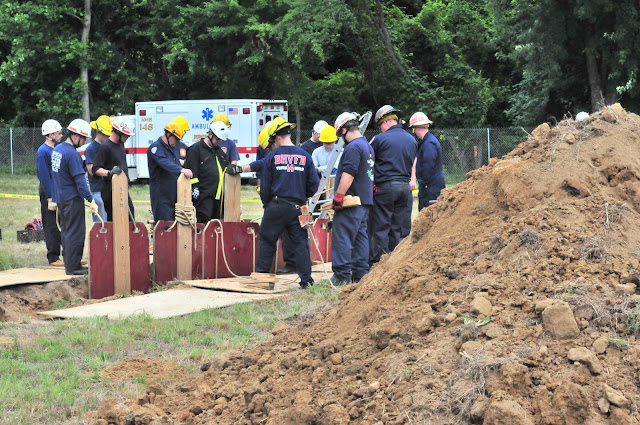 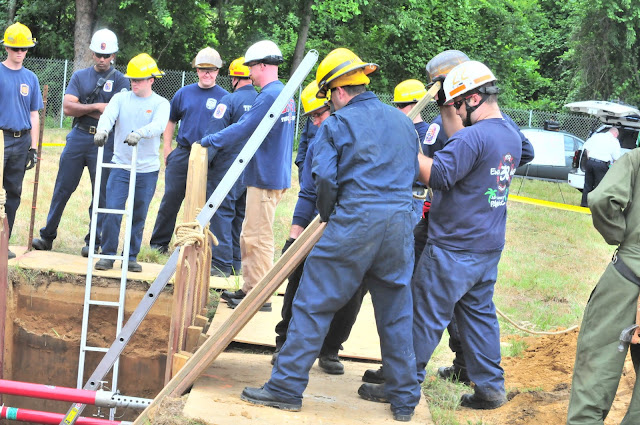 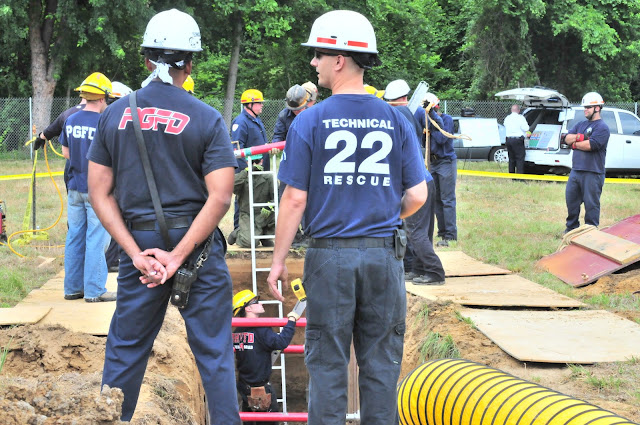 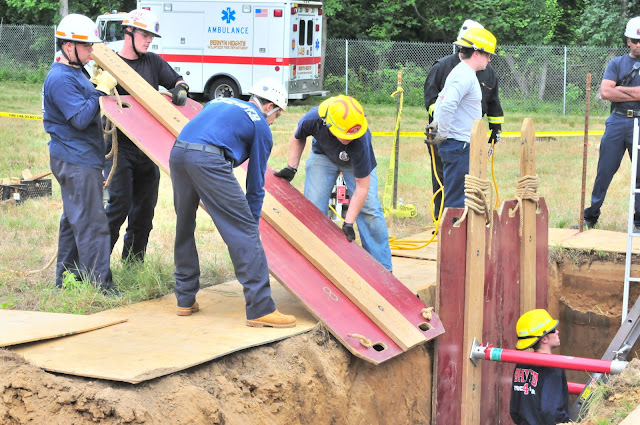 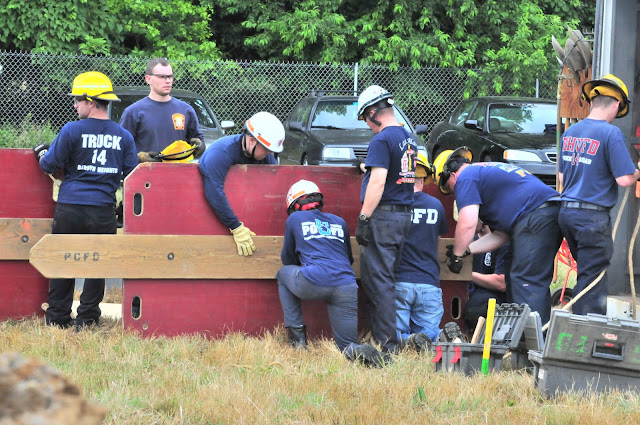 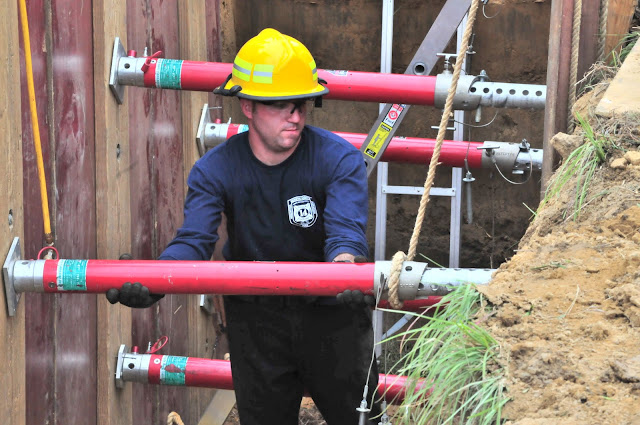 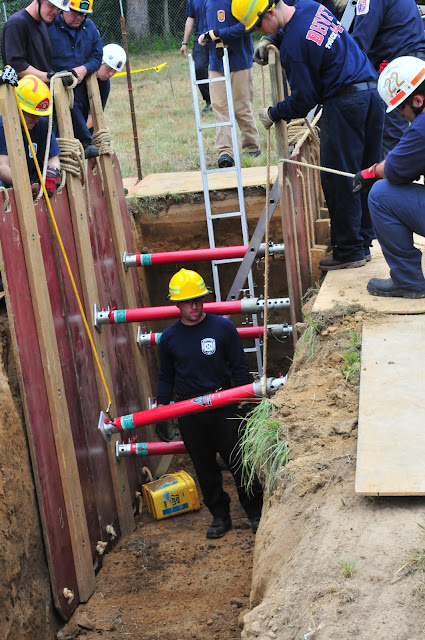 Posted by PGFD at 12:18 PM No comments: Links to this post