Related story from the GAZETTE Newspaper.
Posted by PGFD at 2:08 PM No comments: Links to this post

The Prince George’s County Fire/Emergency Medical Services (EMS) Department has been notified by one of it’s volunteer corporations that the basic life support transport unit (ambulance) will no longer be welcomed at their station, and will be placed out of service within the next week.

The Morningside Volunteer Fire Company, Inc., Prince George’s County Fire/EMS Station 827, in a written notice from their lawyer, stated the ambulance at their station would need to be removed or redeployed by the County on August 19, 2013.

Prince George’s County Fire Chief Marc S. Bashoor sent a letter today to Morningside Volunteer Chief Michael White ordering him to keep the ambulance in service.  This action came after attorneys representing the Morningside Volunteer Fire Department notified the County in a letter (entire letter below) dated August 13, 2013, that “after careful deliberations the membership of MVFD has voted and has decided to keep the date of August 19, 2013 at 0700 by which Ambulance 827 will no longer be authorized on it’s property and should be redeployed.”  After reading the letter Fire Chief Bashoor said, “Their decision will compromise the safety of our citizens and residents, which I will not stand for it.”

This situation is a result of “staffing” brought about by a recent change in the Collective Bargaining Agreement (CBA) between the County and the International Association of Firefighters Local 1619.  This new agreement affects staffing at stations where only 2 career firefighter/medics are on duty.  The Morningside Station currently has 4 career staff on duty from 7:00 A.M. until 3:00 P.M., Monday through Friday.  At all other times, 2 career firefighter/medics remain on duty throughout the 24-hour shift.  The new CBA creates 2 options—either up staff the station with 4 career personnel around the clock, or have the 2 firefighters removed from the 24-hour shift.  Removal of firefighters from the 24-hour shift will require volunteers to staff the apparatus during nights, weekends and holidays.  There are 8 other stations affected by this agreement, with no other adverse actions being taken at this time.

Fire Chief Bashoor had members of his command staff meet with the leadership of the Morningside Station on several occasions, in an attempt to work through this situation.  There has been no progress or change in Morningside’s stance.  Fire Chief Bashoor has ordered the Volunteer Chief, Michael White, to leave the ambulance in service, allowing it to serve the community and be staffed by Volunteer and/or Career staffing.

In 2012, the Morningside ambulance responded to 3,627 calls for service.  This is the 10th busiest basic life support transport unit in the county.  The loss of this unit could create an estimated wait time of about 5 to 10 minutes for another transport unit to respond to the scene of an incident in the Morningside community.

Prince George’s County is the largest and busiest combination (paid, volunteer, civilian) Fire/EMS Departments in the Country.  In 2012, the department responded on 135, 383 calls for service.  Of that figure, nearly 80 percent were EMS-related.

There will be consequences to any actions that attempt to place the ambulance out of service at Morningside.  The station’s Volunteer Fire Chief has been notified of actions that will be taken if they move forward with plans to remove the ambulance.  Actions being considered include, but not limited to, demotion of the volunteer chief and response of fire apparatus limited to areas where they are considered first due.

Fire Chief Marc S. Bashoor will continue to work with county and Morningside leaders to resolve this matter.  The goal is to prevent any adverse effect on the Morningside community and surrounding areas. 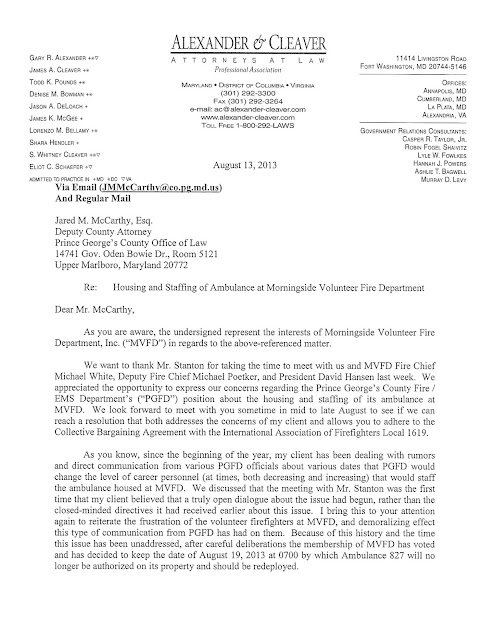 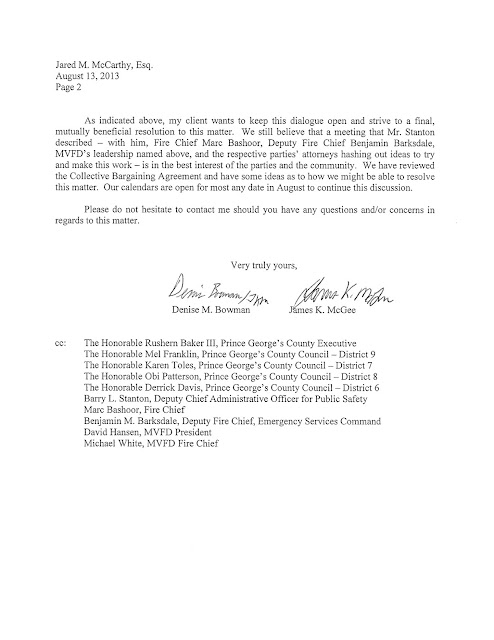 Posted by PGFD at 12:04 PM No comments: Links to this post