The Prince George’s County Fire/Emergency Medical Services (EMS) Department offers the following safety tips, to ensure that all citizens and residents will enjoy a safe and happy Thanksgiving holiday. Unfortunately, fire safety and injury prevention guidelines are often overlooked during the holidays. Prince George's County Fire Chief Eugene A. Jones stated, "By using fire-wise common sense, citizens and residents can avoid tragedy and disruption of their holiday festivities. While these tips may not make Thanksgiving dinner taste any better--they will aid in avoiding potential disaster.

Posted by PGFD at 3:42 PM No comments: Links to this post 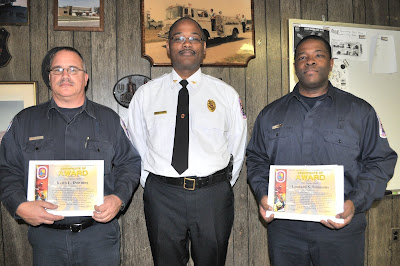 On July 11, 2009, at about 10:15 PM, Fire Fighter/Medic Keith Downing and Fire Fighter/Medic Leonard Simmons, on-board Paramedic 830 from Landover Hills, were dispatched to an emergency medical call involving a diabetic patient. Little did the providers realize that while judiciously treating the patient, a house was on fire on the same street, totally separate from the medical emergency. Unfortunately, both incidents were on a dead-end street and the paramedics were unable to utilize their medic unit to facilitate the transport. Over seven pieces of apparatus, having arrived after the medics, were blocking their means of egress, and it was not possible to move any of the apparatus.

Downing and Simmons quickly realized the predicament, and were creative in developing an alternate method of removing the patient from the scene and transporting to the hospital. Creative, yet not easy. FF/Medic Downing and Simmons took the patient via stretcher over rough terrain, through the patient’s backyard, over a fenced area, and eventually made their way to an adjacent street. Once there, they took custody of another unit which was standing-by for the working fire dispatch, and utilized their unit to complete the transport.

The on-duty Paramedic Supervisor, Paramedic Captain Mary Crampton commended the crew and nominated the team for this award by writing, “Due to their quick-thinking and their ability to think ‘outside the box’, the patient was able to get definitive care in a timely manner.”

Fire Chief Jones presented each of the crew members with an Emergency Services Award and encouraged them to keep up the good work and resourcefulness they displayed on this incident. He stated, “Your actions reflect favorably upon yourself and the entire Fire/EMS Department.”
Posted by PGFD at 1:48 PM No comments: Links to this post

Woman saved from car fire by two “good samaritans”
Posted by PGFD at 9:16 AM No comments: Links to this post