MEDIA CONTACT: Mark E. Brady, Chief Spokesperson, 240-508-7930
Student residents of Denton Hall at the University of Maryland got an early wake-up alarm this morning. It was a “fire alarm” that awakened students at about 4:20 am, Thursday, March 10, 2011. The buildings alarm system was activated by a student to warn other occupants of a fire in the 9-story dormitory. A manual pull fire alarm was activated and the entire building was evacuated.


An electrical component, possibly some type of charging unit, ignited a fire on a desk in a 5th floor room. Firefighters from College Park Fire/EMS Station #812 and other surrounding communities responded to the scene . Upon arrival they found a relatively small fire was already out but smoke had filled the 5th floor hallway on the west side of the building. Firefighters ensured the fire was extinguished and ventilated the smoke from the building. Students were allowed to re-enter the building after being evacuated for about 15 minutes. Firefighters cleared the scene around 5:00 am. The fire is classified as “accidental” and fire loss is estimated at $100.

One female Denton Hall resident was transported to an area hospital from the scene for an unknown illness. It is not known if her illness was related to the fire and evacuation.
Posted by PGFD at 2:06 PM No comments: Links to this post

Email ThisBlogThis!Share to TwitterShare to FacebookShare to Pinterest
Labels: pgfd, University of Maryland

American Legion Announces EMS and Firefighter of the Year Awards 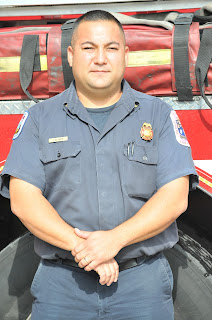 Fire Fighter/Medic Captain James M. Jiron was selected for his actions in September 2010. While off-duty and without hesitation or concern for his own safety, he prevented injuries and perhaps saved two lives in Woodstock, Virginia. Captain Jiron entered a burning home, where he alerted and removed two occupants who were unaware their home was on fire. He was also recently selected as the Knight of Columbus Fire Fighter of the Year for 2010 and is under consideration for a Fire/EMS Department Valor Award. Acting Captain Jiron is currently assigned to College Park Fire/EMS Station #812. 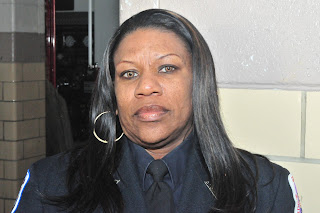 Paramedic Graham was selected for her exceptional performance in 2010 when she was credited with 5 “saves” within a 3-month period. It was also noted that Pam is currently enrolled in higher learning college courses, as well as avid community involvement. Paramedic Graham is also being considered for the American Legion, State of Maryland “2010 EMS of the Year” award. She is currently assigned to the Paramedic Unit at Clinton Fire/EMS Station #825.
Acting Fire Chief Marc S. Bashoor commented, “The performance of our men and women of the Fire/EMS Department never cease to amaze me. Our personnel, career and volunteer, on a daily basis provide the very best fire and EMS to the citizens of Prince George’s County. I am pleased that an organization like the American Legion not only recognizes these high qualities in our personnel, but also takes time to acknowledge them. The actions of Graham and Jiron reflect favorably upon them both personally and professionally, as well as on the entire Fire/EMS Department.”
Posted by PGFD at 12:06 PM No comments: Links to this post