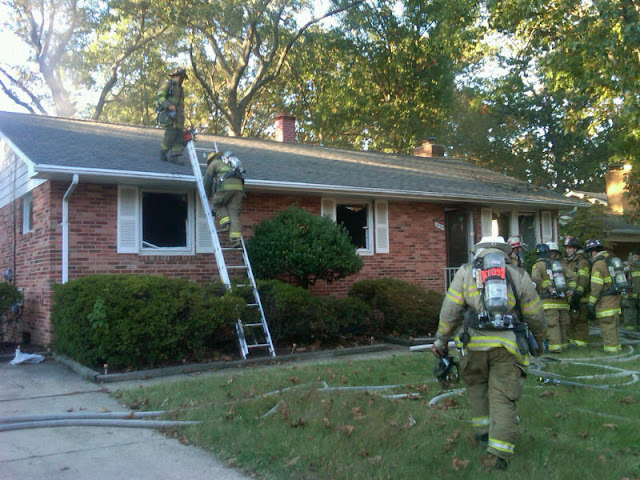 Upon entering the house firefighters quickly extinguished a kitchen fire and limited fire damage to the area of origin.

No injuries were reported. The cause of the fire remains under investigation and preliminary fire loss is estimated at 50,000.

Posted by PGFD at 5:31 PM No comments: Links to this post 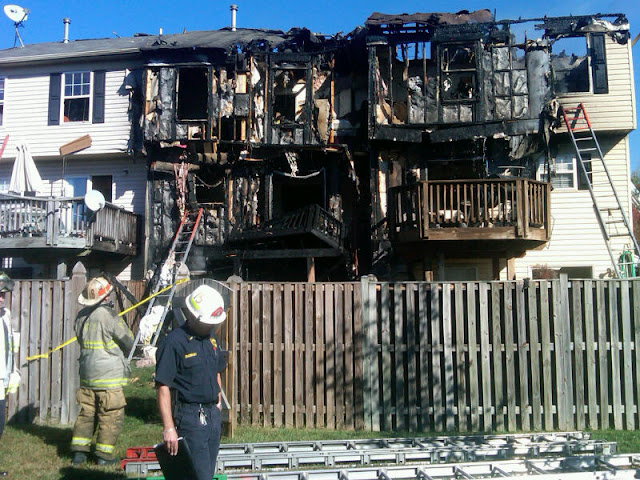 At about 1:45 pm a fire was reported at a townhouse in the 6300 block of Hil Mar Circle East in Forestville. Firefighters arrived to find a row of 2-story with basement, sprinklered, townhouses with heavy smoke coming from the roof area. A fire appears to have started on the ground level, rear exterior of 6302 and extended up the rear wall and into the roof area. The fire also extended to the roofs of the townhouses on both sides before being extinguished.

A second alarm brought 60 firefighters and medics to the scene on 25 pieces of Fire/EMS apparatus.  It required 45 minutes to knock down the bulk of the fire.

Three families; 6 adults, 1 child and 1 dog will be displaced and are being assisted by the Fire/EMS Department's Citizen Services Unit and the Red Cross.

No civilian or firefighter injuries were reported. The cause of the fire is under investigation and a preliminary fire loss is estimated at $200,000.

Posted by PGFD at 3:04 PM No comments: Links to this post