Associate Medical Director Has a Save on First Day


It is no secret that our current Medical Director has been preparing to end his many years of service with the Prince George’s County Fire/Emergency Medical Services (EMS) Department.  After 24 years, Dr. Terry Jodrie will be leaving the department to pursue other interests after his current contract ends in April 2017.  Jodrie feels that one of his most important responsibilities is to prepare someone to take on some of his responsibilities over the next year and fill his role until a new permanent Director can be contracted.

The Fire/EMS Department's Medical Director Terry Jodrie attended the monthly Command Staff meeting on Friday, March 5 and invited Dr. Michael Millin to attend with him.  Millin will serve as the Departments Associate Medical Director until a permanent selection to replace Jodrie is made by the County.

After a morning long staff meeting, Dr. Millin rode along with Assistant Fire Chief Brian Frankel, Commander of Emergency Medical Services.  They stopped by the Capitol Heights Fire/EMS Station 805 to visit with the Firefighter/Medics when the station was alerted for a possible working code at a nearby dialysis center.  Dr. Millin immediately took the opportunity and rode with Engine 805’s crew to the scene of the incident.  Medics from the near-by Kettering/Largo Fire/EMS Station 846 were also dispatched to provide advanced life support.

Upon arrival crews found a pulseless and non-breathing patient and began to work on the patient.  Dialysis center staff had witnessed the patient go into cardiac arrest and immediately provided CPR.  This first step in the “chain of survival” definitely led to the positive outcome for this patient.  Within moments of Engine 805’s arrival, an AED was applied and medical care under the direction of Dr. Millin was started. Soon after the arrival of Medic 846, important medications were administered and the patient had regained a pulse.  Dr. Millin, the crew from Engine 805, and Medic 846 continued advanced life support care on the way to the hospital.  Emergency Department staff advised that the patient had a good prognosis for survival.

So the new Associate Medical Director for the Prince George’s County Fire/EMS Department, Dr. Michael Millin, has had a very good first day.  Millin has some very big shoes to fill and he is off to a good start. 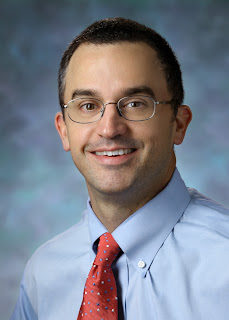 Sub-boarded in Emergency Medical Services (EMS), Dr. Millin joined the faculty with the Department of Emergency Medicine at Johns Hopkins in 2004 after completing a two year EMS fellowship and his MPH in Health Management and Policy in Portland, Oregon.  Millin has been the medical director for the BWI Airport Fire and Rescue Department since 2008, and the Johns Hopkins Lifeline Critical Care Transport Program since 2010.  In addition, he serves on the state EMS protocol committee with the Maryland Institute for Emergency Medical Services Systems (MIEMSS), the State of Maryland Cardiac Arrest Steering Committee and he is the vice-chair/secretary of the EMS Physicians Committee of the Maryland Chapter of the American College of Emergency Physicians.

Nationally, Dr. Millin is the vice-chair of the Resuscitation sub-council of the American Red Cross scientific advisory council.  He is also a past chair of the Standards and Clinical Practice Committee and the immediate past chair of the Wilderness EMS Committee with the National Association of EMS Physicians.  He also works as a disaster physician for the Federal Government as a medical officer with the New Jersey Disaster Medical Assistance Team (NJ -1 DMAT).
Academically Dr. Millin has published over thirty peer-reviewed articles in the fields of EMS, trauma care and disaster medicine.  He has authored numerous chapters in various EMS textbooks, and he has spearheaded the development of over ten national position statements regarding the development of EMS systems and the role of physician medical oversight in EMS.
Dr. Millin got his start in medicine working as a professional ski patroller in Utah.  He is a past national medical advisor for the National Ski Patrol and currently is the medical director for Maryland Search and Rescue (MSAR), a vetted search and rescue (SAR) team with the Maryland Search Teams Task Force and the Appalachian Search and Rescue Conference (ASRC).
In his free time, Dr. Millin enjoys being with his wife and kids and enjoying outdoor activities, especially skiing, hiking, mountain biking and canoeing.
Posted by PGFD at 12:57 PM No comments: Links to this post