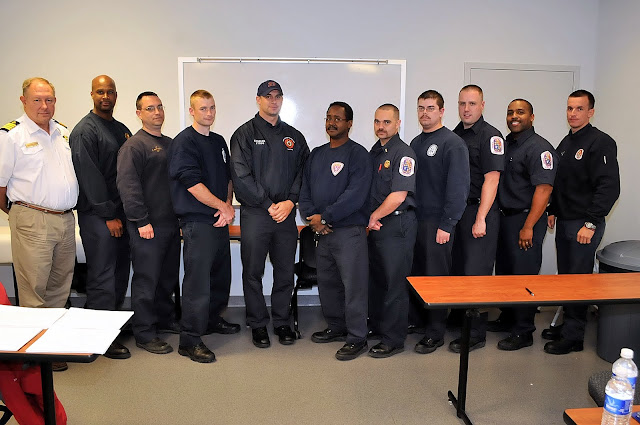 Deserving Awards - "No One Expected Her to be There" 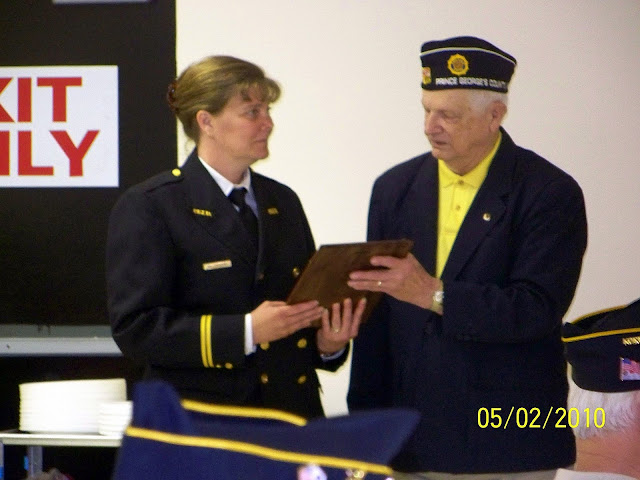 
MEDIA CONTACT: Mark Brady, Chief Spokesperson, 240-508-7930
The American Legion has selected two members of the Prince George’s County Fire/EMS Department as their Career and Volunteer Fire Fighter of the Year. Battalion Chief Denise L. Dickens and Volunteer Fire Fighter Tim McCloskey have received the American Legion Award at the County level and at the Southern Maryland District Level as well. They were recognized at an award ceremony on Sunday, May 2, 2010. The duo also received the Southern Maryland District nominations to the Department of Maryland for their respective awards. No word yet on from the American Legion Public Safety Committee on these nominations.

Battalion Chief Denise Dickens was recognized by the American Legion, County and District, as the Career Fire Fighter of the Year. She impressed the American Legion with her resume, previous awards and excellence in performance of her duties as a member of the Prince George’s County Fire/EMS Department.  She exemplified her professional and personal characteristics by attending Sundays event.  No one expected Battalion Chief Dickens to attend the recent award ceremony as she recently suffered the death of husband, Jack Dickens, a retired member of the Fire/EMS Department. Jack succumbed to his battle against cancer in the early morning hours of Wednesday April 21, 2010. With the short time between her husband’s passing and the awards ceremony, no one believed that Denise would be in attendance. However, Jack Dickens had other plans for his beloved wife; Jack made his wife promise that if she was selected as the award recipient that she would attend, she kept the promise and attended the award ceremony with her dad. American Legion representative Bill Milligan stated, “We were not expecting Denise to attend the awards ceremony due to the recent passing of her husband. We were very pleased that she attended with her dad and very proud to present the Career Fire Fighter of the Year award from both Prince George’s County and the Southern Maryland District to a very outstanding and deserving individual.”

Kentland Volunteer Fire Fighter Tim McCloskey is being recognized as the Volunteer Fire Fighter of the year for his impressive resume and actions for his role in saving two lives from burning homes in 2009. He recently received a Silver and Gold Medal of Valor for those actions at the Prince George’s County Public Safety Valor Awards.

Another award for a volunteer member of Kentland occurred on Wednesday, April 28, 2010, Kentland Volunteers were joined by County Fire Department officials and the Liberty Mutual Insurance Company for an award luncheon at the Fire/EMS Station in Landover, MD. The event was held in recognition of Volunteer Fire Fighter/EMT Fred Caramiello's actions in saving unconscious and non-breathing infant child on April 6, 2010.

Representatives from the Liberty Mutual Insurance were on hand to present their “FIREMARK” award to Caramiello. Twenty years ago Liberty Mutual started honoring America’s firefighters with the prestigious FIREMARK Award. Liberty Mutual Insurance standard for the awards is that while fires and life threatening events are riddled with chaos and tragedy, they also spotlight the tremendous good displayed by our nations firefighters, paramedics and EMT’s; good that is embodied by the selfless deeds of brave men and women who enter burning homes to save victims or to save a life regardless of circumstances. This award is presented annually to one individual from the metropolitan area. This is the second consecutive year that a member of the Prince George’s County Fire/EMS Department has received this award.

After the award presentation, Liberty Mutual provided lunch for the members and guests in attendance. The entire Fire/EMS family congratulates Kentland Volunteer Fire Fighter Fred Caramiello on his award and in keeping with the highest tradition of the fire service. Emergency Operations Commander Lt. Col. Derrick Lea represented the Fire/EMS Department at the award presentation. 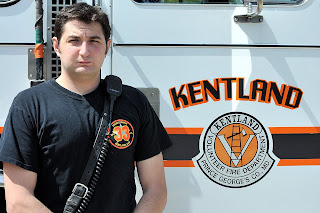 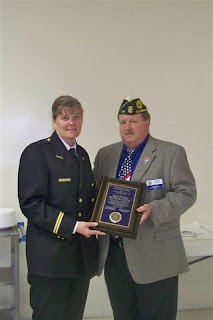 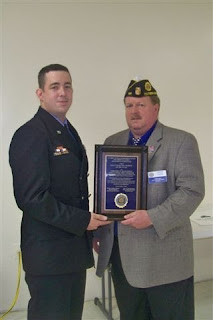 Presenting the American Legion Awards to Dickens and McCloskey is Southern Maryland District Commander -- Steve Tatro from Calvert Post 85, Huntingtown, MD.
Posted by PGFD at 11:27 AM No comments: Links to this post