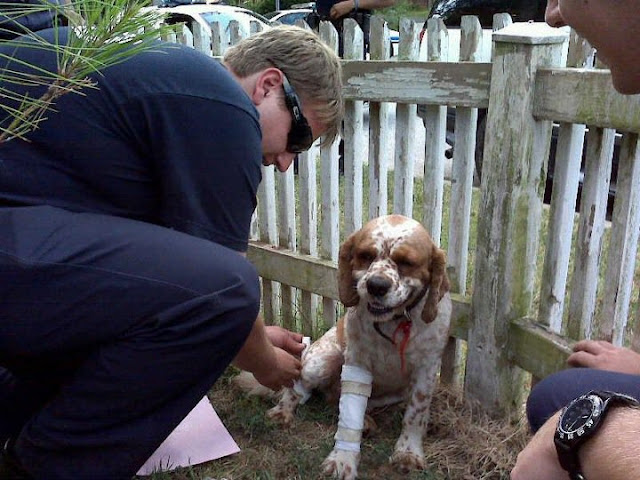 During the first hour of their shift, firefighter/medics from the Landover Hills Fire/EMS Station were summoned to render aid for uncontrollable bleeding on the leg of a victim of a pit bull attack. At about 7:30 am, Friday, July 9, 2010, a 911 call was received reporting Pit Bull attack in the 5700 block of 66th Avenue in Riverdale. As per protocol, Animal Control officials and County Police were dispatched to the scene. The police arrived first and located the victim suffering from several bite wounds to his front and rear paws. Peluche, a 3-year-old, Cocker Spaniel was attacked by a Pit Bull and was bleeding from the bite wounds and with an extended ETA for animal control officers, the police officer requested the firefighter/medics to come into the scene to tend to the wounds and attempt to stop the profuse bleeding. 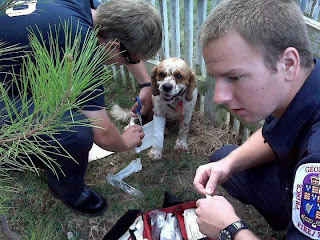 The crew of Fire Lieutenant Beardmore, Fire Fighter/Medics Yarish, Miller and Francis arrived on the scene and applied basic first aid measures to control the bleeding and dress the wounds. Veterinary surgery was required to repair the wounds and Peluche’s owner stated that her pet was doing fine and recuperating from her ordeal. She also conveyed her sincerest thanks to the members of public safety that responded and tended to her injured pet.

Providing first-aid to an injured animal is not common, yet, is another service Prince George’s County Firefighters and Paramedics are placed in a position to provide on an as-needed basis. Personnel understand the importance of pets to families and are grateful to assist when and where possible while keeping safety of themselves and others as a priority.

Pictures:  Fire Fighter/Medics Yarish and Miller tend to the injured Cocker Spaniel.
Posted by PGFD at 1:26 PM No comments: Links to this post