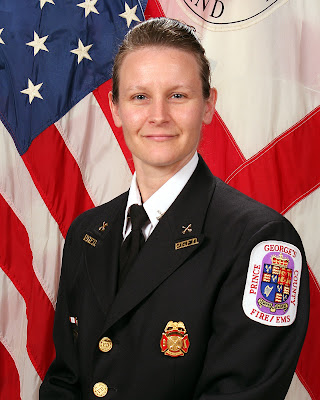 The Prince George’s County Fire/Emergency Medical Services (EMS) Department is proud to announce that one of our members has been selected by the International Associations of Fire Chiefs to receive one the organization’s top awards.

Battalion Chief Sayshan L. Conver-White will be presented with the “Safety Officer of the Year Award,” at the IAFC’s annual convention, Fire-Rescue International (FRI).  The event will be held in Atlanta, Georgia, August 26 -29.

In 2007, Sayshan became the Department’s first on duty Safety Officer.  Her passion for firefighter safety led the Department to establish an Operational Safety office that now includes both a career and volunteer safety officers around the clock.  Sayshan developed a safety program incorporating the National Fallen Firefighters Foundation’s (NFFF) 16 Life Safety Initiatives, which are now incorporated into nearly every phase of our daily operations. This program has been viewed by surrounding jurisdictions as a model for their Safety programs.

She has developed a Departmental Safety Officer training program to ensure a succession plan for the Operational Safety office.  She also initiated use of the Near Miss program to members of the Department.  Several incidents have been submitted to improve firefighter safety nationwide.  Her passion for firefighter safety has dramatically changed the safety culture within the Department.  In fact, since 2013, the number of firefighter injuries has been reduced by 16 percent.

Sayshan’s passion for firefighter safety goes far beyond her own Department.   She chaired the Washington Metropolitan Council of Governments (COG) Safety and Health Committee from 2008-2015, and co-chaired the Maryland Emergency Services Life Safety Task Force from 2011-2015.  Through these leadership roles, she coordinated and taught at numerous safety conferences throughout the state, to include COG’s Arrive Alive and Survive; Mid-Atlantic Life Safety Conference; and MFRI’s Learning from the Past, Improving the Future seminar.  She attended the NFFF’s Safety/Training Officer’s National Summit in Philadelphia, Pennsylvania.

Sayshan has been requested to be an intimate part of safety investigation teams throughout the region, including but not limited to:

Upon hearing that Sayshan was selected to receive this prestigious award,   Fire Chief Marc Bashoor stated, “Battalion Fire Chief Conver-White is an exceptional member of our Department.  She is driven to be the very best she can be in the performance of her job as Safety Officer.  Her well researched and through safety investigations reports have highlighted improvements that not only benefit Prince George’s County but firefighters across the globe.  Congratulations on a well-deserved award.”

Battalion Chief Conver-White will receive her award in Atlanta, Georgia on Thursday, August 27, at 1:00 pm.

Here are some links to stories that include Battalion Chief Conver-White:

Posted by PGFD at 12:58 PM No comments: Links to this post