MEDIA CONTACT: Mark E. Brady, Chief Spokesperson, 240-508-7930
The Prince George’s County Fire/Emergency Medical Services (EMS) Department will join with others across the Country in raising the awareness of breast cancer. October is breast cancer awareness month and we will help to highlight that one in eight women will develop breast cancer and every three minutes a woman is diagnosed with breast cancer. Breast cancer, not only effects women, but a percentage of men as well. Approximately 1,600 men will become breast cancer victims with about 400 diagnoses resulting in death. Though much research and strides have been made to cure the disease, much more research is needed to aid in the education and prevention to help save lives from this type of cancer. 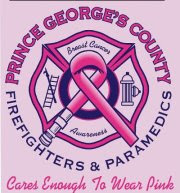 This year the Fire/EMS Department will participate in the nationwide campaign for breast cancer awareness with members having the option of donning pink shirts Sunday, October 16, 2011 through Saturday, October 22, 2011. Prince George's County Fire Chief Marc S. Bashoor stated, "The color 'pink' has become symbolic of breast cancer awareness. I am authorizing the change in work uniforms during this time to help with awareness efforts."

A member of our Department has designed T-shirts that reflect our advocacy for breast cancer awareness. The shirts will display a symbol of care and compassion for those affected while demonstrating a level of professionalism to be seen by a member of the community.


Chief Bashoor stated, "If not you, we all know someone who has been affected by breast cancer. This is an opportunity for us to show our support and I know that the men and women of this Department will do their part to support this worthy cause."

There are two T-shirts approved; one designed to be worn by all members of the Department; career, civilian and volunteer members or one designed for career personnel with a specially designed Local 1619 logo.  Additional information about the Department's efforts for Breast Cancer awareness and the need to raise funds for additional research will follow.
Posted by PGFD at 1:34 PM No comments: Links to this post 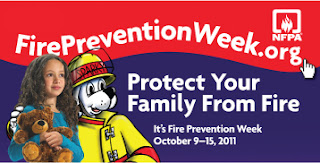 It's Fire Prevention Week and Fire/EMS Stations throughout Prince George's County are opening their doors to highlight protecting your family from fire.  The Branchville and Brandywine Volunteer Fire Departments held open house events this past weekend hosting dozens of families and kids of all ages.  Additional open house events are scheduled this coming weekend as well as later this month.
﻿
﻿

According to an NFPA survey, less than one-fourth of Americans have both developed and practiced a home fire escape plan (PDF, 640 KB).

Almost three-quarters of Americans do have an escape plan; however, less than half actually practiced it.

One-third of Americans households who made and estimate they thought they would have at least 6 minutes before a fire in there home would become life threatening. The time available is often less. And only 8% said their first thought on hearing a smoke alarm would be to get out!

Roughly two-thirds of home fire deaths happen in homes with no smoke alarms or no working smoke alarms. About one in five smoke alarm failures was due to dead batteries.

Working smoke alarms cut the risk of dying in reported home fires in half.

Automatic fire sprinkler systems cut the risk of dying in a home fire by about 80%.

Home fire sprinklers can contain and may even extinguish a fire in less time than it would take the fire department to arrive on the scene.

Sprinklers are highly effective because they react so quickly in a fire. They reduce the risk of death or injury from a fire because they dramatically reduce the heat, flames and smoke produced, allowing people time to evacuate the home.

Unattended cooking was by far the leading cause of these fires.

Households using electric ranges have a higher risk of fires than those using gas ranges.

Children under five face a higher risk of non-fire burns associated with cooking than being burned in a cooking fire.

Nearly half (45%) of microwave oven injuries seen at emergency rooms in 2009 were scalds.

Fires involving heating equipment peak in December, January and February, as do deaths from these fires. Overall, homes fires and home fire deaths are also more common in the cooler months of the year.

Heating equipment was the second leading cause of all reported home fires and home fire deaths.

Half of home heating fire deaths resulted from fires caused by heating equipment too close to things that can burn, such as upholstered furniture, clothing, mattresses or bedding.

The risk of dying in a home structure fire caused by smoking materials rises with age.

In recent years, Canada and the United States have required that all cigarettes sold must be “fire safe,” that is have reduced ignition strength and less likely to start fires.

During 2005-2009, electrical distribution and lighting equipment was involved in the ignition of 23,400 home structure fires, on average, per year. These fires caused an average of 390 deaths, 970 injuries and $822 million in direct property damage.

On average, there are 35 home candle fires reported per day.

Roughly two-fifths of these fires started in the bedroom.

More than half of all candle fires start when things that can burn are too close to the candle.


For additional information on fire prevention contact the Prince George's County Fire/EMS Department Community Outreach office at 301-883-5250. For a smoke alarm installed in your home, free of charge, contact our Safety First Smoke Alarm Line at 301-864-SAFE (7233).
Posted by PGFD at 12:44 PM No comments: Links to this post