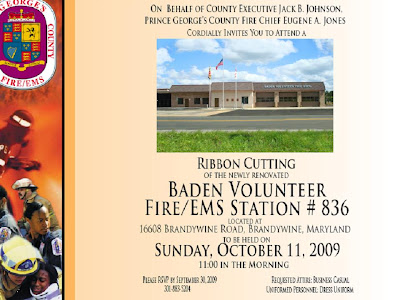 Posted by PGFD at 3:49 PM No comments: Links to this post 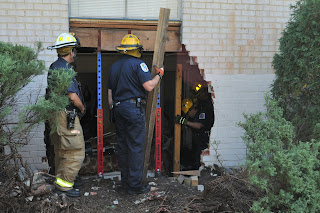 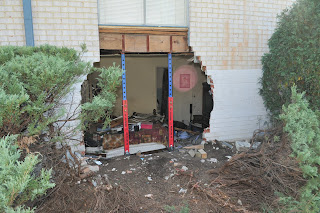 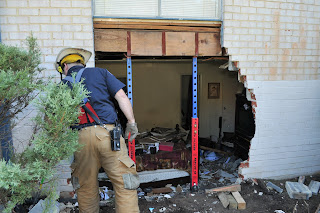 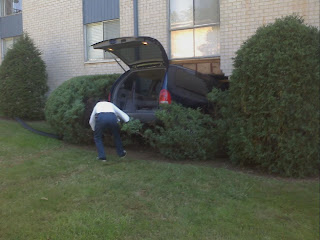 Prince George’s County Firefighters and Paramedics responded to a motor vehicle crash with injuries this morning that involved a vehicle penetrating an apartment building window/wall and injuring the apartment’s occupant. At about 10:05 AM, Monday, October 5, 2009, Fire/EMS units from the Lanham area responded to the Carrollton East Apartment Complex and arrived at 9747 Good Luck Road in Lanham to find a mini-van halfway into a ground level apartment bedroom window and wall. The adult male driver trainee and his friend, serving as a driver instructor, were not injured during the crash; however, an adult male that was sitting on a chair in the bedroom sustained an injured leg from flying bricks. He was transported to a local hospital and is expected to be treated and released today. The Fire/EMS Departments Technical Rescue Team assisted in the removal of the vehicle and shoring of the large hole in the building where the vehicle had entered.

Witnesses reported the mini-van was parked and the occupants were involved with discussing driving procedures. As soon as the vehicle was placed into drive, it accelerated at a high rate of speed and travelled about 25 yards before crashing into the building. The vehicle operator and occupant are in custody of the County Police as the crash investigation continues. Charges against them are pending.
Posted by PGFD at 12:46 PM No comments: Links to this post