VOLUNTEERS ANSWER THE CALL FOR HELP

The Prince George’s County Fire/Emergency Medical Services (EMS) Department has been well known as one of the largest and busiest combination, volunteer and career, departments in the country, if not the world. The Department is currently comprised of about 700 career firefighters and paramedics, 1,050 volunteers (with about half of these participating in emergency operations) and 80 civilian employees, protecting 480 square miles and the nearly 830,000 citizens and residents. Annually, we respond to over 130,000 calls for service, of which, 75% are EMS related.

Fire and emergency medical services are provided through 44 stations that combine 37 volunteer corporations and a career department that combined in 1970 under a Charter form of Government to become the Prince George’s County Fire Department. "EMS" was later added to our official title to appropriately reflect our primary services. Traditionally, a combination of career and volunteers staff the fire/EMS stations located throughout Prince George’s County. In comparison to other area jurisdictions, the Prince George’s County Fire/EMS Department ranks second in the number of stations, yet, rank last in the number of career staffing and next to last in volunteer participation. Currently, the combined volunteer and career staffing are meeting the challenges in day-to-day staffing. However, overlapping coverage areas, the high number of stations to staff and not enough personnel to continually staff these stations are of a primary concern as we look forward in the operations of this Department.

The volunteer components of our Fire/EMS Department have provided staffing to their respective station and have never been involved in the day-to-day staffing equation by the County. A downturn in the nationwide and county economy has certainly caused Fire/EMS management to make a fiscally responsible review of our staffing. Volunteers have been asked to assist in the daunting task of continuing to provide the best possible fire and emergency medical services to our citizens and residents. Fire Chief Eugene Jones has worked with the volunteer leadership to meet the challenge of providing one of our most valuable resources – staffing of fire and EMS units on a daily basis. “In a time of great financial pressure the chief has shown great leadership to the department. Chief Jones has opened his office to all segments of the department. He will be a great leader with his openness,” said John Alter, Chairman, Prince George’s County Fire Commission.

During the past five months, Chief Jones has joined with the Prince George’s County Volunteer Fire and Rescue Association (PGCVFRA) and the Fire Commission to rally volunteers to improve public safety. During this time, volunteers cover day in and day out above the normal coverage patterns. Chief Jones stated, “I am extremely pleased that the volunteers have consistently served the citizens of this County. We have asked them to serve above and beyond their normal response patterns and they have responded well. I appreciate their service.”

The Fire/EMS Department, faced with a reduced staff from retirements, reduced funds to pay overtime and a mandate to fall within its budget, have turned to volunteers in an effort to continue to provide the best fire and emergency medical services possible. A program entitled: Volunteer Staffing Utilization Plan (VSU) identifies dates that volunteers would be required to staff their stations while the career firefighters are re-deployed to cover vacant positions in other stations. The stations are selected so as not to burden any one community on any given day. As of July 1, 2009, the VSU calendar was expanded to include up to eight stations per day that career staff would be re-deployed and the frequency of days also increased placing additional responsibilities on volunteers.

The President of the PGCVFRA, who is also the Volunteer Fire Chief of the Silver Hill Volunteer Fire Department, William “Buddy” King, stated, “I appreciate the cooperation we have been receiving from Fire Chief Eugene A. Jones. The past five months have certainly been challenging for the volunteers. I am extremely proud that the volunteers from many of the stations in the County have been stepping up to staff their stations during these difficult times. Fire Chief Jones’ leadership is a refreshing change to the Prince George’s County Fire/EMS Department and the Volunteer Fire Departments that serve this County.” He concluded by stating, “I hope the cooperation and leadership style continues and that the Prince George’s County Fire/EMS System will soon be recognized as the premiere combination career/volunteer fire department in the nation.”

The transition in deploying firefighter staffing has not been without issue. Some of the challenges include timely communications and some stations not being able to muster enough volunteers to cover a complete shift. To face these challenges, Fire Chief Jones has opened up direct lines of communications and has provided the volunteer leadership a seat at the decision making table. As we move forward, there will be additional issues as well as accomplishments and with the continued cooperation of career and volunteer leaders, the Prince George’s County Fire/EMS Department will weather the storm and continue to provide the best possible fire and emergency medical services available. Any negative impacts on public safety have been and will continue to be reduced by the number of volunteers that are providing staffing. While it is a challenge to provide total coverage on a daily basis, the VSU has been a great success and volunteer leadership and rank and file members are to be congratulated for their dedication and commitment to the citizens and residents of Prince George’s County.
Posted by PGFD at 12:35 PM No comments: Links to this post 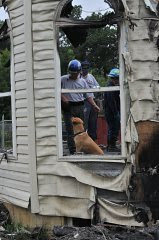 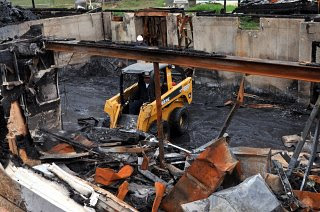 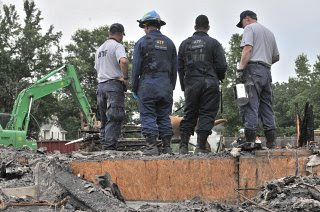 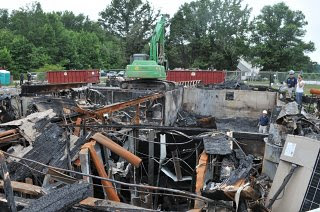 Prince George’s County Fire Investigators continue to investigate a Bowie house fire that occurred in mid June. Fire Investigators are being assisted this week by an Anne Arundel County Fire Accelerant Detection/Arson dog, agents from the Bureau of Alcohol, Tobacco, Firearms and Explosives (ATF) as well as officials from Nationwide Insurance Company. Officials from the County Department of Environmental Resources are also on-site to assist with examining the fire protection system. The investigation centers on a house fire that occurred at about 2:30 A.M., June 15, 2009, in the 100 Block of Stan Fey Drive.

The investigation is moving forward as a large crane and small bull dozer were brought on site to remove debris from the basement of the house to allow personnel an opportunity to continue their search for a cause and origin of this fire. The fire loss is estimated at $1.5 million.

Fire Investigators worked throughout the day on Monday, July 20, 2009 and will continue their work today.
Posted by PGFD at 9:56 AM No comments: Links to this post