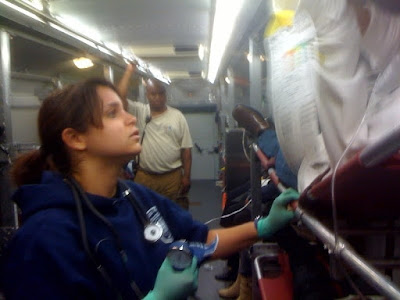 Prince George’s County Firefighters and Paramedics were summoned to a church to tend to a sick child and encountered that and many more. At about 6:30 PM, Saturday, November 7, 2009, a 911 call was received from an individual at Saint Bernard’s Church, 5700 St. Bernard’s Drive, in Riverdale, reporting a sick child feeling faint, nausea and dizzy. An ambulance and paramedic unit arrived on the scene, treated two children with the ambulance transporting two females, ages 9 and 10, to an area hospital. It was believed they were suffering from a food related illness after recently consuming a meal from a fast food restaurant.

As the ambulance departed the scene, the paramedics from College Park Fire/EMS Station 812 were packing up their equipment and preparing to leave the scene when they were rapidly presented with several additional sick people exiting the church. Paramedics quickly assessed the patients that were experiencing similar symptoms that the two children had and realized that this was a potential carbon monoxide (CO) emergency. Early arrivals for the 7:00 PM Saturday evening Mass at Saint Bernard’s Church had been exposed to high levels of CO and were displaying the classic symptoms of exposure to the “silent killer.” The paramedics were quickly overwhelmed with patients and called via their two-way radio for additional resources and assistance.

Additional Firefighters, Paramedics, the Departments Hazardous Materials Team, Mass-Casualty Support Unit and Medical Ambulance Bus were called to the scene. Incident commander soon learned that work on the church’s boiler had been performed earlier in the day. A gas meter detecting the level of CO in the atmosphere showed levels at 1300 parts per million (ppm). A normal CO level should be around 0 – 30 ppm. The air you breathe begins to become unhealthy after it rises above 30 ppm and sickness will begin to affect a person based on the level of CO and the amount of time exposed to the unhealthy air. The church was evacuated of about 100 congregants and the utilities were shut off. CO levels started to decrease after the boiler was shut down.

A third patient, 40 year-old-female, was transported shortly after the arrival of additional EMS units as personnel from Medic 812 continued to assess/triage and treat additional patients. Additionally, they had to isolate initial patients into a localized treatment area, while keeping additional civilians out of the treatment area, and preventing civilians from re-entering the building. 10 additional patients were assessed/triaged while receiving oxygen and being monitored by paramedics on the scene. These patients were identified as having mild to moderate CO inhalation injuries. Treatment for these types of injuries are best treated at a hospital with a hyperbaric chamber. Hyperbaric treatment provides oxygen in a high pressure environment to displace CO. These 10 patients were transported to a Specialty Trauma Center in Baltimore that has a hyperbaric chamber on-board the Departments Medical Ambulance Bus. These patients included: a 43/female, 39/female, 34/female, 32/female, 8/female, 23/male, 36/male, 19/female, 39/male, and a 23/female.

Firefighters ventilated the large church and ensured CO levels were at an acceptable level before leaving the scene.

Carbon Monoxide is colorless and tasteless byproduct of combustion. A malfunctioning boiler is believed to be responsible for the build-up of CO in the building. The exact cause of the problem with the boiler will be identified and repaired by a licensed technician. The most effective way of measuring the CO level in your home, business and areas of public assembly are to install and maintain working carbon monoxide alarms. These alarms are relatively inexpensive, about $25, and can be purchased at home improvement stores.
Posted by PGFD at 12:53 PM No comments: Links to this post