MEDIA CONTACT: Mark E. Brady, Chief Spokesperson, 240-508-7930
Firefighter/Medics from the Hyattsville and surrounding stations were alerted for a possible natural gas odor with sick people at about 10:00 am this morning. Fire/EMS units responded to 6511 America Boulevard; a 4-story office building with retail and restaurants occupying the ground level. Firefighters initiated an investigation of the odor and evaluation of two workers complaining of near fainting. 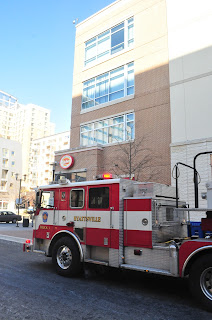 Using gas tracking meters and monitoring equipment firefighters were unable to detect an odor or any presence of natural gas or carbon monoxide in the building.

Upon further investigation, it was discovered that a restaurant was in the process of cleaning their cooking equipment , hood and exhaust system. An industrial strength product is used to clean this equipment and it produced a pungent odor that traveled through the upper floors of the building.

The condition of the two sick employees rapidly improved after being removed to a fresh air environment by paramedics and refused to go to the hospital.

The entire building was ventilated and the approximately 300 workers that had evacuated the building were allowed to return at about 10:45 am.
Posted by PGFD at 11:06 AM No comments: Links to this post