A father rescued along with his young daughter by firefighters from their burning Hyattsville apartment last week has succumbed to his injuries. A 911 call from the management office of the complex reported the apartment fire just before 9:00 AM, Friday, February 26, 2010. Prince George’s County Firefighters from Hyattsville and surrounding communities responded to the 3200 block of Toledo Place, Toledo Plaza Apartments, and arrived to find a fire in a second floor apartment of the 3-story brick apartment building. Firefighters stretched hoselines into the apartment and initiated a search and rescue for any trapped occupants. Firefighters located two unconscious occupants in the apartment of origin. The father and daughter, an adult male and female child, were immediately removed to the exterior of the building where medics initiated medical care. A precautionary 2nd Alarm was sounded but never utilized as the fire was knocked down quickly and contained to the apartment of origin.

Fire Investigators from the Fire/EMS Departments Office of the Fire Marshal determined the fire was “accidental” and attributed to an extension cord. An extension cord, powering a space heater, was underneath a couch and ignited the fire. Fire damage was estimated at $60,000.

The 3 ½ year-old-female spent the weekend in the hospital until her release on Monday. Her father, Mohamed M. Magassouba, 39 years-of-age (DOB 4/24/1970), tragically, succumbed to his injuries on Wednesday, March 3, 2010.

Citizens and residents should use this tragic incident as a reminder that extension cords should only be used when they are of a compatible rating with the appliance bring powered and never placed underneath carpets, furniture or inside walls or ceilings. A space heater uses a large amount of electricity to generate heat. The electric current demand by a space heater is typically higher then what a regular household extension cord can handle. An under-rated extension cord used to power a space heater could overheat and cause a fire.
Posted by PGFD at 2:39 PM No comments: Links to this post

At approximately 9:00 AM, Tuesday, March 2, 2010, Fire/EMS units were dispatched to the 800 block of Booker Place in Chapel Oaks for a possible house fire. Upon arrival units discovered a 2-story, duplex-style, multi-family structure, with heavy smoke showing on the 2nd floor. One occupant was home at the time as was able to escape unharmed. Firefighters were able to contain and extinguish the fire on the 2nd floor and stop any extension to the other side of duplex. A family of 6 (2 adults and 4 children) were displaced and assisted by the Citizens Service Unit and the American Red Cross. No injuries were reported. 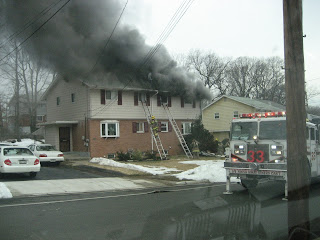 The cause of the fire was due to an electrical appliance with a preliminary fire loss estimated at $60,000. The structure sustained $50,000 in damages and $10,000 in damages to contents.
Fire/EMS units operating at the scene were Chapel Oaks, Kentland, Seat Pleasant, Ritchie, Landover Hills and District Heights. There were a 45 firefighters/medics operating on the fire ground.
Posted by PGFD at 9:18 AM No comments: Links to this post