Fire Investigators are working to determine the cause and origin of a fire that has claimed the life of a Mount Rainer man.  At about 9:45 pm, Tuesday, July 2, firefighters were alerted to a house fire in the 3700 block of 36th Street.  Fire/EMS units arrived and encountered a 3-story single family home with fire showing from the top floor and a report of a person still inside.

Firefighters made their way up to the top floor and quickly knocked down the fire and discovered an adult male, approximately 70 years of age.  The victim was unconscious and suffering from severe burn injuries.  The man was brought outside where paramedics assessed the victim and pronounced him deceased.

Two other occupants of the home were on a lower floor when they heard a smoke alarm sounding from the top floor.  They were able to escape unharmed.

Two firefighters were injured during the incident.  A firefighter sustained 2nd degree burns to portions of his upper body.  He was transported to the Burn Unit at Medstar Washington Hospital Center.  Another firefighter was injured when an extended ladder gave out from underneath him.  He was treated for an injured knee.  Both firefighters were treated and released.

As a matter of routine, the County Police Homicide Unit and the City of Mount Rainier Police Department will be assisting Fire Investigators until a cause of origin and autopsy are complete.

The cause of the fire remains under investigation.  Additional information will be released as soon as it becomes available, including the identity of the deceased. 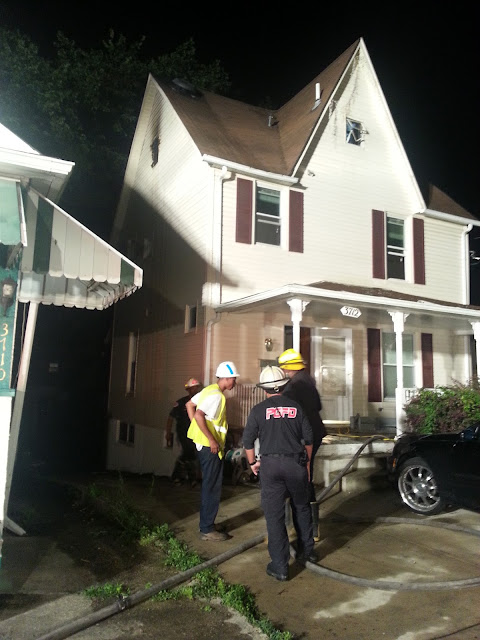 Posted by PGFD at 1:43 AM No comments: Links to this post

Just before midnight on Tuesday, July 2, a 2-vehicle crash occurred in the 8400 block of Ardwick-Ardmore Road in Landover.  A sedan carrying 3 teenagers became partially wedged underneath a tractor trailer during the crash.  The teens, despite having sustained serious injuries, were able to escape from their vehicle before both vehicles burst into flames.  The trailer was carrying a product used in the manufacture of mattress. It required about 20 minutes to knock the fire down.

Two of the injured teens were transported by paramedics to a local Trauma Center.  One teen was taken by a Maryland State Police meda-vac helicopter to a Trauma Center in Baltimore.

The driver of the tractor-trailer was not injured.

County Police were on the scene investigating the crash.
Posted by PGFD at 1:19 AM No comments: Links to this post