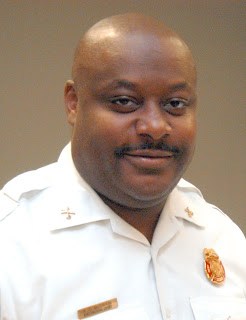 A Prince George’s County Fire/EMS Department member was seriously injured in an off-duty motor vehicle crash early this morning. Battalion Chief Kenneth D. McSwain was involved in a three vehicle motor vehicle crash on the Capital Beltway near Central Avenue around 1:00 AM, Thursday, August 20, 2009. He was the driver and lone occupant of his personally-owned Ford Explorer and had to be extricated from his vehicle.

McSwain was flown by Maryland State Police Trooper 2 to Baltimore Shock Trauma where he is being treated for multiple injuries including extremity fractures and soft tissue injuries. Family members, Department officials and friends are currently at the hospital.

Lt Col. Tyrone Wells, brother-in-law of McSwain, provided an update at 9:00 AM. Kenny’s injuries have been stabilized and are considered serious non-life threatening. Kenny is still in the Trauma Unit and will undergo 6 to 8 hours of surgery today to repair the injuries. He will be in a recovery room until sometime tomorrow. It is expected that his stay in the hospital will extend up to 2-weeks with an unknown period of rehabilitation after that.

Only immediate family members will have brief moments to be with Kenny over the next 24 hours as he begins his recovery from his injuries and surgery. The family is not discouraging anyone that feels the need to be at the hospital to visit as they may wish.

Prince George’s County Fire Chief Eugene A. Jones is monitoring Kenny’s status and receiving updates from personnel at the hospital. He stated, “Our thoughts, prayers and best wishes to Kenny McSwain and his family during this time of recovery. It is at times like these that we realize that our co-workers are more then just co-workers – they are members of our extended family and we are personally affected by their pain, on or off duty.”

Battalion Chief Kenneth D. McSwain, a 19-year member of the Prince George’s County Fire/EMS Department is married and the father of two girls. His current assignment is the Commander in the Fifth Battalion which includes Oxon Hill, National Harbor, Fort Washington and Accokeek. Media and the public may recall McSwain as the calming voice heard on the radio as the incident commander at the Penn-Mar Shopping Center explosion. He conducted numerous media interviews the day of and day after the incident.
Posted by PGFD at 9:59 AM No comments: Links to this post