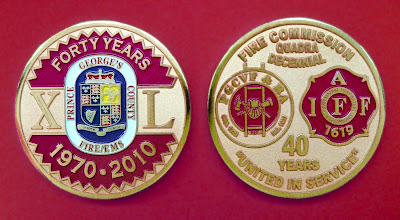 MEDIA CONTACT: Mark E. Brady, Chief Spokesperson, 240-508-7930
The Prince George’s County Fire/Emergency Medical Services (EMS) Department has released a collectable to celebrate the 40th Anniversary of the Department. The Fire/EMS Department was formed under a Charter Form of Government in 1970. To celebrate the occasion, we have created a commemorative "challenge coin" that reflects the strong affiliations that comprise our Department. (Challenge coins, which originate in paramilitary tradition, are collectable medallions bearing an organization’s insignia or emblem which are often carried by the organization’s members. They are presented to prove membership when challenged and to enhance morale.) The County Fire/EMS Department Seal is displayed on the obverse of the coin surrounded by 40 points and the letters "XL". The reverse side has the Volunteer Fire and Rescue Association and the Firefighters and Paramedics IAFF Local seal along with the designation of the Fire Commissions celebrating its 40th Anniversary as well.

The challenge coin was developed by Community Outreach Manger Jeff Callaway and was produced in cooperation with the Fire/EMS Foundation. Fire Chief Eugene Jones was provided with a quantity of coins to distribute in celebration of our 40th Anniversary. There are a limited number of coins still available and can be purchased for a minimum donation to the Fire/EMS Foundation.

For additional information on the purchase of a PGFD 40th Anniversary Challenge Coin contact the Community Outreach Office at 301-583-1883 or e-mail jlcallaway@co.pg.md.us.
Posted by PGFD at 9:26 AM No comments: Links to this post