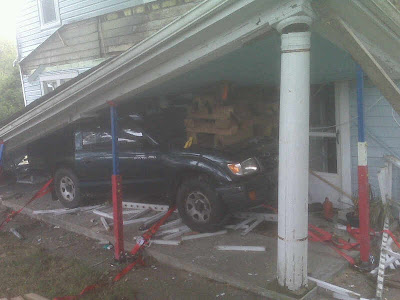 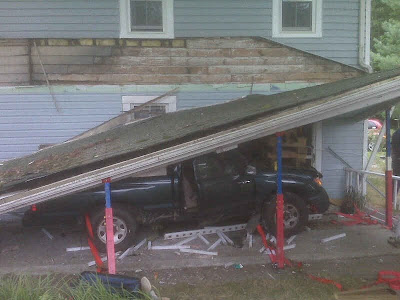 At about 9:53 AM, Prince George’s County Firefighters, Paramedics and Collapse Team were alerted to a vehicle crash into a house in Upper Marlboro. Fire/EMS units arrived at 10400 Croom Road and discovered a two-story farm house with a vehicle that had crashed into the front porch of the house and caused a structural collapse trapping the driver inside the vehicle. The porch roof and other debris collapsed on top of the vehicle and trapped the driver inside. Firefighters and the Collapse Team had to shore up and support the collapsed section of the porch roof and then remove portions of the porch roof and other debris from around the vehicle before completing patient extrication at 10:36 AM.

The lone vehicle occupant, 30ish year old male, experienced a loss of consciousness and medics could not determine if the patient experienced a medical emergency resulting in the crash or if the patient sustained trauma injuries from the crash. As a precaution, the adult male will be treated as a trauma patient and flown by a Maryland State Police Trooper to an area Trauma Center.

A Building Inspector from the County Department of Environmental Resources has been called to the scene to inspect the damage to the house and determine if it safe to occupy.

The County Police Department will be investigating the crash.
View Larger Map
Posted by PGFD at 10:49 AM No comments: Links to this post