Barrier Protection - the Difference Between Tragedy and Everyone Going Home

Apparatus placement at the scene of a high-speed highway motor vehicle crash (MVC) proved to be the difference between a tragedy and everybody going home.  Firefighters from the Branchville Volunteer Fire Company, Prince George’s County, Maryland, Fire/EMS Station 811, recently experienced a close call whereas their engine was positioned to provide barrier protection for personnel operating at the scene of an MVC.  All personnel returned to the station shaken but unharmed after the recent close call on the Capital Beltway in College Park.

A Branchville Volunteer Firefighter/EMT describes the roadway as, “Interstate 95/495 or more commonly known as the Capital Beltway is a four lane high volume congested loop highway that surrounds the DC Metro area. The area of the beltway located in Prince George’s County typically has one of the highest accident and fatality rates of any portion of the beltway.”

The incident scene was located on the Beltway's Outer Loop (North Bound) between Route 1 (Baltimore Avenue) and the interchange of Interstate 95.  This particular stretch of road has six travel lanes with multiple on/off ramps.  Vehicles must maneuver with other traffic and between lanes to access the North Bound I-95 towards Baltimore or to remain on the Capital Beltway headed towards Silver Spring.  The posted speed limit is 55 MPH.

At about 4:15 am, August 18, Fire/EMS units and the Maryland State Police were dispatched to a personal injury accident on the Capital Beltway near the interchange with Interstate 95 in College Park.  EMS personnel tended to the civilians involved in the crash, firefighters inspected the vehicles involved and police were starting to document the crash scene when without warning a car slammed into the side of the Branchville engine.

Upon arrival, Engine 811's wagon driver, a long-time and experienced emergency vehicle operator, had purposely placed the engine in a position to provide barrier protection to personnel and civilians at the original crash site.  This decision and correct placement saved lives and prevented serious injury to many that were just on the other side of the unit.  The original crash did not involve any injuries and the crews from Branchville were preparing to board the apparatus to leave the scene when their apparatus was struck.

A vehicle in total disregard of multiple emergency warning lights broadsided the Branchville engine at a high rate of speed.  The striking vehicle was totaled and the Branchville engine sustained significant damage, estimated at about $50,000 +.  The damage rendered the unit unusable and will not be available for several months.

The striking motorist miraculously was not injured and was taken into custody by police.  He underwent testing for impairment and intoxication.  He has since been charged by the Prince George's County Police Department with multiple traffic violations.

Barrier protection, never turning your back to on-coming traffic, wearing high visibility vests and exercising extreme caution at all times while operating on a roadway will help to make sure everyone goes home after every call.  Remember - SAFETY FIRST.

All photos were provided courtesy of the Branchville Volunteer Fire Co. and Rescue Squad, Inc. 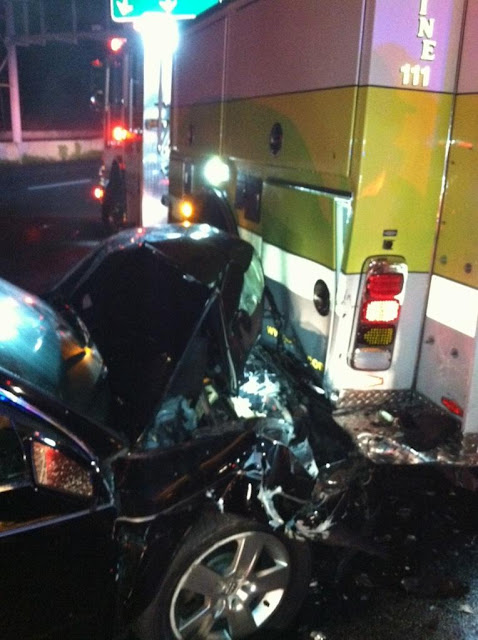 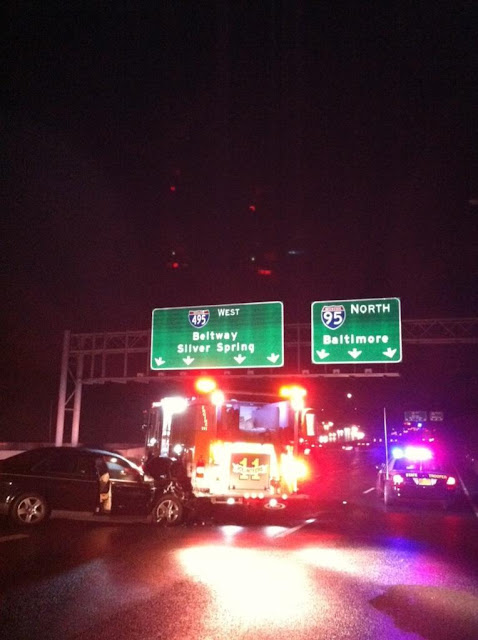 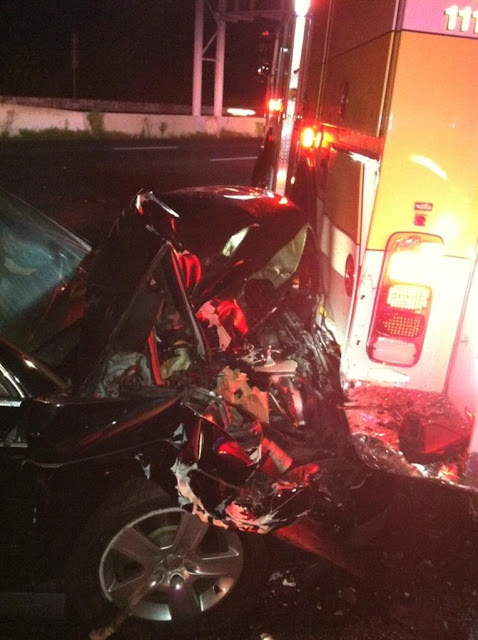 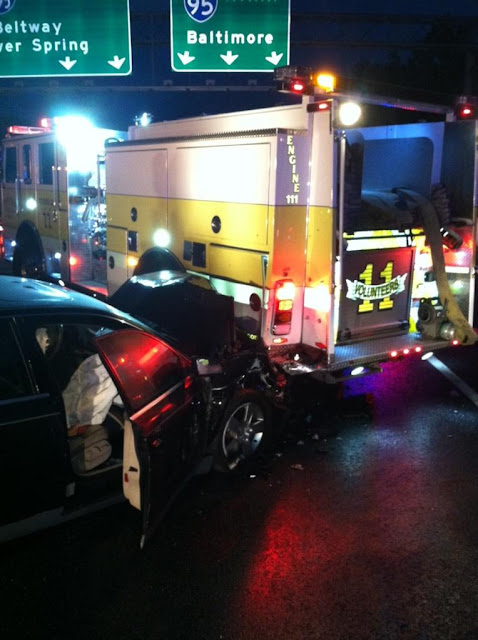 Posted by PGFD at 2:29 PM No comments: Links to this post

Firefighter/Medics from the Riverdale Heights Fire/EMS Station 813 and Battalion Chief Doubleday joined County Council Chair Andrea Harrison, other members of the Roger Heights TNI committee, the Police Department, Department of Public Works and Transportation and the Department of Environmental Resources to accomplish this effort.

The group canvassed streets collecting piles of tree trimmings and bulk trash.  Firefighters also checked with residents about smoke alarms and carbon monoxide detectors and made arrangements to return to install these life saving devices. 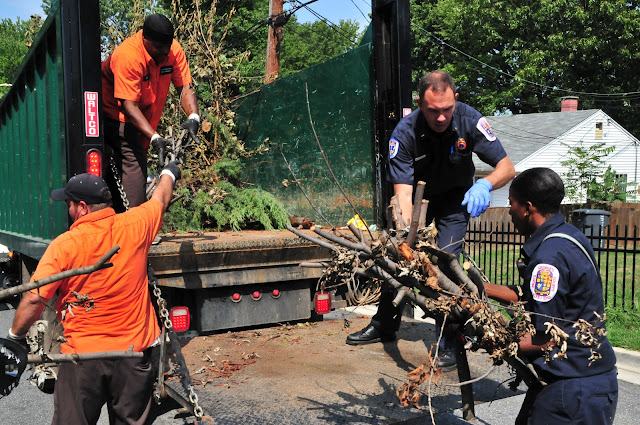 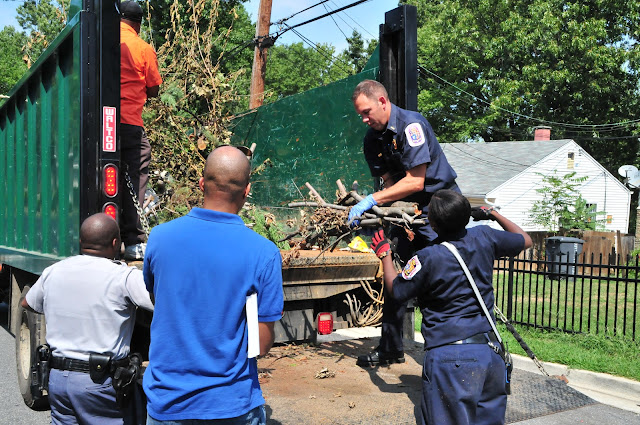 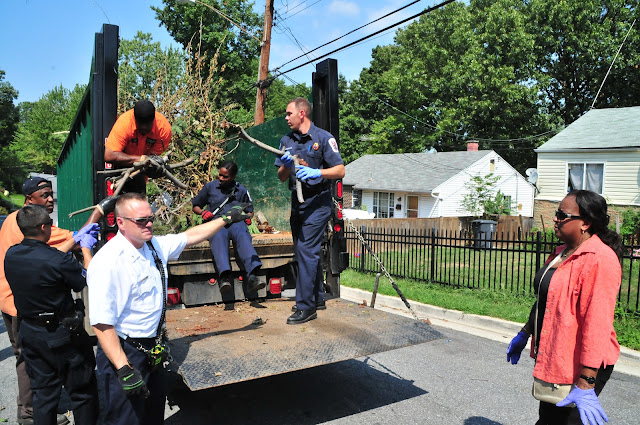 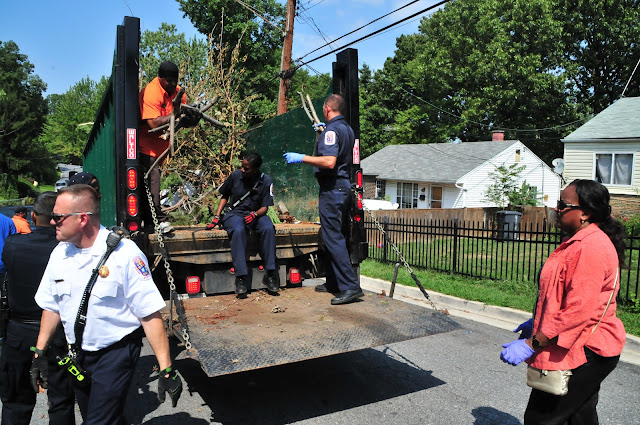 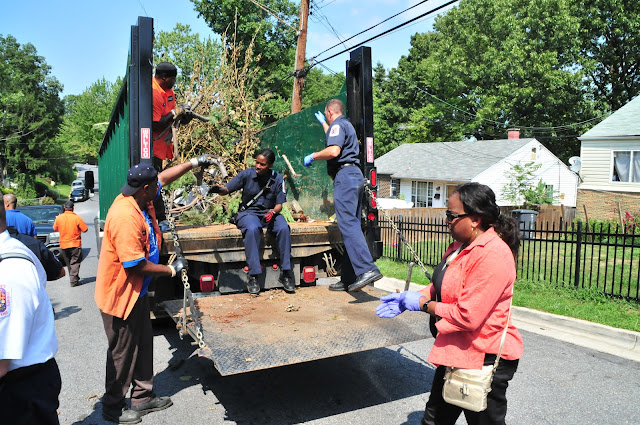