Firefighter Will Remain in Burn Unit Through Weekend

A firefighter injured while battling a 2-alarm townhouse fire remains hospitalized recovering from his burn injuries. Kentland Volunteer Lieutenant Chris Rutter sustained significant burns to his back while operating inside a burning townhouse in the 9000 block of Continental Place in Landover during the early morning of Saturday, January 15, 2011.  Rutter sustained his injuries when he fell from the first floor into the basement of the townhouse that was undergoing remodeling.

Rutter has undergone multiple treatments and surgical procedures at the Burn Unit of the Washington Hospital Center since his admission last Saturday. Kentland Volunteer Chief Tony Kelleher advised today that doctors examined Chris's wounds this morning and opted to keep him in the hospital through the weekend with a possible release on Monday.

Volunteer Lieutenant Rutter remains in good condition and good spirits while he is in the constant companionship of fellow firefighters and friends. Kentland has been updating their Facebook page about Rutters status and wrote, “The Officers and Membership of the Kentland Volunteer Fire Department would like to thank everyone again for their overwhelming support.”

For original press release on the fire, click here.

A reporter with Prince George's Community Television really got involved with her work last week. Members of the Prince George's County Fire/EMS Department were conducting an Ice Rescue Class at Blandensburg Marina when a camera crew and reporter showed up to cover the story. The reporter was offered the opportunity to experience first hand what it feels like to be rescued from icy waters. Tremendous story by PGCTV and really is worthy of recognition.
Posted by PGFD at 12:46 PM No comments: Links to this post

MEDIA CONTACT: Mark E. Brady, Chief Spokesperson, 240-508-7930, mebrady@co.pg.md.us
The Humane Society of the United States has recognized our Department for an incident in February 2010. The Humane Society bestowed the Prince George’s County Fire/Emergency Medical Services (EMS) Department with the Humane Civil Servant Award. This annual award recognizes civil servants who have performed an act of significant courage or compassion to assist an animal in need.

In a letter that accompanied the award certificate, Humane Society President and CEO Wayne Pacelle wrote, “In February 2010, Prince George’s County Firefighter/Medics and the Technical Services Team went well beyond their routine responsibilities to rescue a dog that had fallen 25 feet into a storm drain in Laurel. Had it not been for your Department’s willingness to help, it is likely the story would have had a tragic ending. Not only did you save the dog, but you also prevented inexperienced bystanders from putting their own lives in jeopardy to save him. In doing so, you demonstrated your dedication to protecting others, and we are honored to have this opportunity to celebrate your heroic response.”

The Prince George’s County Fire/EMS Department is grateful to have been recognized by the Humane Society of the United States and acknowledge their award with a great deal of pride and accomplishment.

For the original story on the dog rescue, click here. 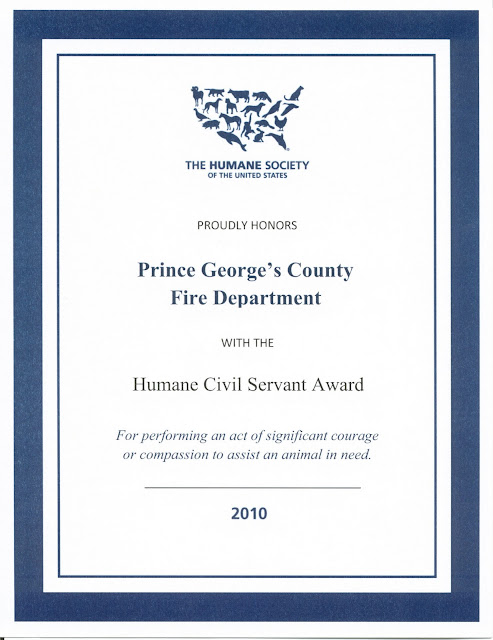 Posted by PGFD at 12:12 PM No comments: Links to this post

MEDIA CONTACT: Mark E. Brady, Chief Spokesperson, 240-508-7930, mebrady@co.pg.md.us
This is a recording of just one of the 911 callers reporting a neighbors house on fire.  This call occurred around 4:00 am, Wednesday, January 19, 2011.  The callers calm demeanor is impressive despite the scene she was describing.  She provided key answers to the call-taker that handled the information in an expeditious and professional manner.


The caller was on on a wireless land line phone or cell phone and provided important information to the call-taker while walking in the immediate area of the house fire.  The call-taker entered the initial call as soon as he had the who, what, when and where and then entered additional information that he was able to glean from the caller.  This information, primarily, about children still inside, was relayed from dispatchers to responding Fire/EMS personnel.  Firefighters arrived within four minutes of dispatch and removed the two young girls from their burning home.


Prince George's County Public Safety Communications Center (PSC) is the Public Safety Answering Point (PSAP) for Prince Georges County. This means that all 911 calls in Prince Georges County are routed to the center for dispatching of proper emergency personnel.
PSC consists of approximately 190 authorized personnel that are responsible for all aspects including call taking, dispatching, technical support, radio system, and personnel functions.
Prince George’s County processes over 1.5 million 9-1-1 calls per year. By utilizing a Computer Aided Dispatch System, they are able to coordinate dispatching for the Police Department, Fire/EMS Stations, 9 Municipal Police Departments, and the Sheriff’s Department. Both our 9-1-1 Call-Takers and Dispatchers are trained to provide advanced emergency medical dispatch services.
Should you have any questions or comments please e-mail PSC@:
911customerservice@co.pg.md.us
This Email link should be used for Feedback and Informational purposes ONLY.
Posted by PGFD at 9:18 AM No comments: Links to this post