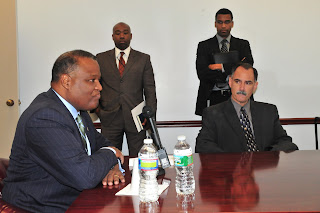 Prince George's County Executive Rushern L. Baker, III, attended a meeting this afternoon at the Fire/EMS Department Headquarters in Largo.  He was there to greet civilian and career members of the Department's command staff and take a tour of the offices.  During the meeting County Executive Baker reinforced his decision in selecting Marc Bashoor as the acting Fire Chief.  The County Executive also expressed his support and confidence in future decisions and actions taken by Bashoor.

Each member of the command staff took a moment to introduce themselves, describe their current assignments and had an opportunity to ask questions. 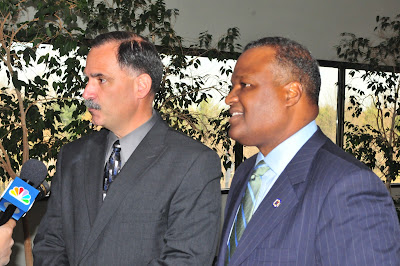 After the meeting; the County Executive and Acting Fire Chief fielded questions from the media.
Posted by PGFD at 2:50 PM No comments: Links to this post

Just after 5:00 am this morning firefighters from the Brentwood area were dispatched to a report of a building fire at 4637 37th Street. Upon arrival they discovered a 50 x 75 garage with a truck fire to the rear and extension into the building.

Fire Investigations was on the scene and indicates the cause as under investigation. The fire loss was placed at approximately $20,000 total for the structure and contents.

Posted by PGFD at 7:59 AM No comments: Links to this post