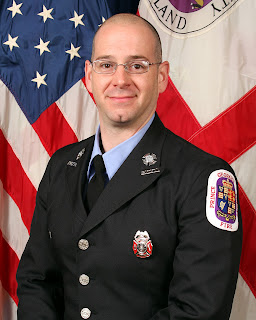 May the distance of time in no way diminish our resolve to ensure that our Fallen Heroes are never forgotten.  Let us pause to remember our Fallen Hero from the Prince George's County Fire/EMS Department, Firefighter Jesse W. McCullough, lost this day in 2018.

Jesse was born on November 8, 1976, in Massachusetts.  He was a traveler as well as a talented and respected artist, having graduated from the Corcoran School of the Arts and Design. He joined the Prince George's County Fire/EMS Department as a volunteer in 2007 and was hired on February 11, 2013, as a member of Career Recruit School 47.

In January of 2017, McCullough became ill and was soon thereafter diagnosed with colorectal cancer.  He fought this battle as he lived, with all that was in him. He died on October 9, 2018.

Jesse served the Prince George's County Fire/EMS Department for nearly 11 years.  At the time of his death, Jesse McCullough was 41 years old and survived by his wife and their two beautiful daughters.

Let us learn from their stories so that our safety today stands as a lasting tribute to those who have gone before us.  And let us keep their memory forever in our hearts.

Posted by PGFD at 9:53 AM No comments: Links to this post