BALTIMORE – They may wear different patches. But, three metropolitan fire chiefs shared some similar challenges and issues with Firehouse Expo attendees Friday morning.
Howard County, MD Fire Chief Bill Goddard and Prince George’s County Chief Marc Bashoor and Alexandria, Va. Fire Chief Adam Thiel all say they have way too many things to do than respond every time the tones drop. They say they rely on their officers to handle operations.
The chiefs said a good officer has it all -- training, education and experience.
View Firehouse Expo 13 coverage
Thiel added that his definition of diversity is not how people look but the different perspectives they bring to the table. Unfortunately, people who don’t pursue their education and keep up with training are getting by-passed for promotions.
Bashoor and Goddard, who lead combination departments, said it’s also imperative that officers – volunteer or career – be on the same sheet of music. 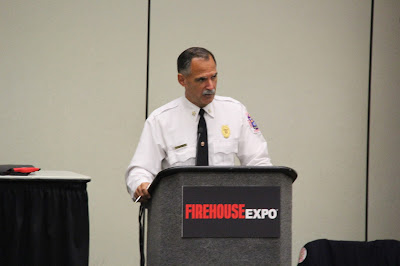 “It’s important they set the politics aside and focus on what they’re here for – to serve the public,” Bashoor said adding that he feels it’s important to keep the line of communication open. If not, rumors are allowed to fester.

He added that for the first time, volunteer and paid firefighters are in recruit school together training side by side. 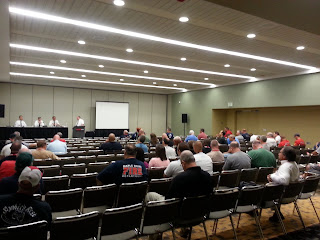 Goddard said personnel and citizens in his county are especially proud that they’ve increased the survival rate of cardiac arrest patients. He said he’s proud to see how people are embracing and getting involved with the program.
They were the first jurisdiction on the East Coast to host the CPR Academy.
In Alexandria, firefighters are EMTs and respond as first responders while the medics handle ALS and transports.
Thiel told the group he experienced his worst night as a firefighter and chief last year when one of his paramedics – Josh Weisman – died of traumatic injuries after falling from an overpass.
Weisman wasn’t aware there was a gap between the bridges when he jumped to cross over. He landed on the rip rap below, suffering severe head injuries.
Had he crossed just 18 inches to the left, he would have made it.
Thiel continued as the firefighters shook their heads: “I hate vehicle fires. I don’t know why we put ourselves at such risk for vehicle fires…”
He added that the internal report has not yet been made public.
Bashoor said he is assisting the volunteer companies with recruitment and retention by hiring a person to focus on recruiting. “I believe centralizing this will help…”
He also said he is working on ways to encourage professional development.

Meanwhile, Goddard told the fire and rescue personnel: “In spite of the challenges, there is no better time to be in this business, no better time to be a fire chief and come up with creative ideas…”
Thiel said he takes every opportunity to remind people they are responsible for helping reduce line of duty deaths and injuries. It’s aggravating that they continue to put on their seatbelts and masks, and are not slowing down.
Posted by PGFD at 9:14 PM No comments: Links to this post