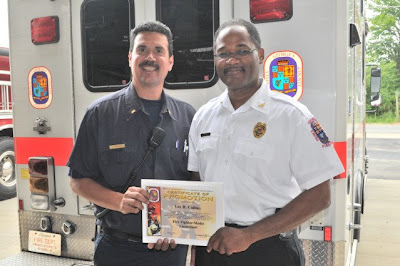 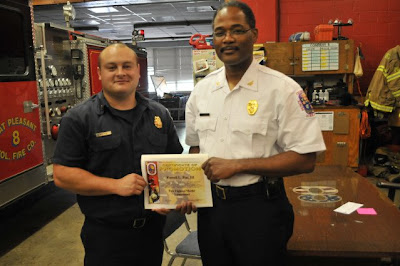 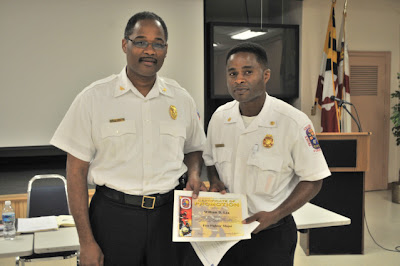 Prince George’s County Fire Chief Eugene A. Jones recently promoted three members of the Department. In each of the promotional presentations Fire Chief Jones stated, “This promotion is in recognition of your dedication and commitment that you have invested in the Departmental promotional process.” He continued by saying, “I personally challenge you to continue leading, educating, and motivating our personnel in providing the best customer service for our citizens and residents in Prince George’s County.” The promotions were effective as of Sunday, July 26, 2009.

Our sincerest congratulations on your promotions and our very best wishes for your continuing success.
Posted by PGFD at 1:36 PM No comments: Links to this post

Seat Pleasant, Tuxedo-Cheverly, Forestville and Allentown Road will have career staffing re-deployed for a 24 hour shift starting at 7AM.


Hyattsville and Berwyn Heights will have their career day crews re-deployed.

The VSU plan will continue, on a reduced basis, when the new staffing plan goes into effect on August 2, 2009.


A piliot program will evaluate the adjusting the number of Fire units dispatched on incidents that, initially, do not require a full box assignment. An assignment of 2 engines, 2 special services and a Battalion Commander will be dispatched to investigate citizen reports of smoke odors, appliances, etc. A full box assignment of 4 engines, 3 specials serices and a Battalion Commander will continue to be dispatched on incidents reporting an actual fire or high-life safety structure. The assignments may be upgraded by the Public Safety Communications Supervisor or the command officer on any given incident.

The new Staffing Plan has been released. These changes will take place on Sunday, August 2, 2009.

The new staffing plan was a result of state and county budget cuts, which is reflective of the national economic climate, which has impacted all county agencies.

Jones said he has been working with the leadership of the labor force and volunteer command since March 2009 to develop a staffing plan that will have the least amount of impact on public safety.

Historically, Prince George’s County has staffed the second highest number of stations of any other jurisdiction within the Baltimore-Washington area, Jones said. In addition, 22 Fire/EMS Stations are within 1.5 miles of each other, he said.

“In light of that fact, we have sufficient coverage to allow us to reduce the number of stations we staff with career personnel,” Jones said. “We have response areas that overlap each other which are not necessary. Redeploying personnel makes sense. It reduces costs, improves efficiency and effectiveness. Crew safety is increased for all those affected by the moves reducing the number of two person responses. The Fire/EMS Department has taken great efforts in continuing to provide the best possible fire and emergency medical services.”

“We can no longer continue to operate as we have in the past,” Jones said. “Financial challenges will affect many facets of our organization and require alterations to the manner by which we prepare and respond to calls for service.” He concluded by saying, “We have paid millions of dollars in overtime over the years and we must be more responsible with the tax revenue the citizens provide us to respond to calls for service.”

After careful consideration and examination of these factors, the resulting changes have been recommended: Career staffing at fire/EMS stations will be redeployed according to the areas that demand coverage, as well as to the demand for services.

This is an overview of the consolidation of the Prince George’s County Fire/EMS Department. These are fluid changes that are subject to adjustment and will be effective Sunday, August 2, 2009.

The following Fire/EMS Stations will have adjustments made to their present staffing levels:

Posted by PGFD at 11:06 AM No comments: Links to this post