As many as 20 people, including 2 infants, are displaced after an early morning fire damaged a row of Greenbelt townhouses. At about 1:45 AM, Thursday, April 8, 2010, multiple 911 calls reported a fire in the 7800 block of Jacobs Drive. Firefighters from Greenbelt Fire/EMS Station 835 soon arrived to find heavy fire coming from the rear of the townhouse. The fire involved a row of five, 2-story, with terrace level, townhomes of lightweight construction and non-sprinklered.


Firefighters mounted an aggressive interior attack stretching hoselines into the attached residence in hopes of cutting off the quick moving fire. Additional resources were called to the scene by way of a Fire Task Force and Second Alarm totaling about 70 firefighters and paramedics on board 17 pieces of apparatus working at the scene. The fire continued to grow in intensity extending both horizontally and vertically. Wooden decks attached to the rear of the structures collapsed. Fire Incident Commanders understood the deck collapse to be an indication of a weakening structural integrity and ordered all firefighters to evacuate the structure and take a defensive position on the exterior. Within 10 minutes of ensuring the safety of all personnel a significant collapse occurred in the second townhouse. Firefighters continued to work on extinguishing the fire from the safety of the exterior and had the fire knocked down in about 1 hour.

Fire Investigators estimated $600,000 in fire loss with the majority of the damage being confined to three of the five townhomes. The cause of the fire remains under investigation as Investigators will need to secure the damaged structures and ensure their safety while they sift through the damaged areas in search of the area of origin and cause of the fire. There were no civilian injuries and 1 minor knee injury to a firefighter that did not require any immediate treatment.

Posted by PGFD at 9:07 AM No comments: Links to this post

Firefighter in Right Place-Right Time to Save a Baby 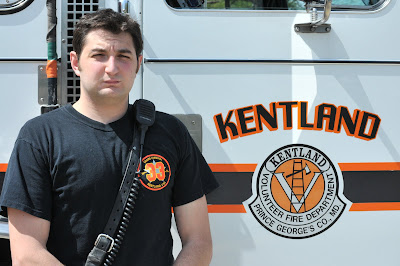 The life of a 1-year-old child was saved yesterday by firefighters as they returned from battling a brush fire. At about 7:30 PM, Tuesday, April 6, 2010, an engine from Kentland Fire/EMS Station 833 was returning to their station after working for 3 hours at a brush fire in Bowie. As they approached their station they were dispatched as a first responder to a 911 report that a child was choking and had stopped breathing at a home on nearby Greely Place in Landover. Family members, knowing the Kentland Volunteer Fire/EMS Station was nearby, took the infant in the car and headed towards the station.

As the Kentland engine was maneuvering their apparatus to turn around and respond on the call, a passenger car approached and blocked them in. A family member got out of the car holding a non-breathing 1-year-old female and rapidly approached the engine. The family member handed the infant over to Volunteer Fire Fighter and Emergency Medical Technician Fred Caramiello on-board Engine 833 and explained that the child had been choking. Fire Fighter Caramiello quickly assessed the infant and confirmed she was not breathing and performed several back-slaps on the infant and was successful in dislodging the obstruction. The infant then started spontaneous breathing on her own. Paramedics that had been responding on the original call to Greely Place arrived quickly and transported the infant to a nearby hospital.

The infant’s uncle and godfather, Daryl Lindsay, told us today that the infant remains hospitalized but is in good condition and is expected to make a full recovery.
Posted by PGFD at 9:01 AM No comments: Links to this post