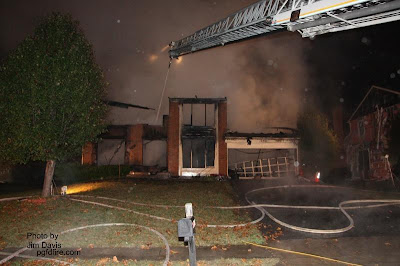 Firefighters from Upper Marlboro and surrounding communities battled a house fire that burned so intensely; it damaged neighbor’s homes on both sides. Several 911 callers near the burning home reported heavy smoke and fire were visible. Firefighters and paramedics were alerted around 1:45 AM, Tuesday, November 3, 2009, and arrived in the 13200 block of Ailesbury Court to find a 2-story, non-sprinklered, single family home fully involved with fire. Firefighters immediately started to battle the fire from the safety of the exterior of the home as the fire consumed the entire structure. Firefighting was hampered by broken natural gas lines inside the burning structure which had to be secured before the fire could be completely extinguished.

Due to the large amount of fire and intense heat, homes on either side of the burning structure sustained damage before firefighters arrived and stretched hoselines to protect those exposures. The occupants of the home were soon accounted for and no civilian or firefighter injuries were reported. Fire loss is estimated at $300,000 and the cause of the fire is under investigation. This incident had 30 firefighters working for nearly a 1 ½ hours before the fire was declared extinguished. The displaced family will be making their own arrangements for housing.
Posted by PGFD at 9:24 AM No comments: Links to this post