NASA - We Have No Haz-Mat Problem

At about 5:30 pm, Tuesday, July 13, 2010, officials from NASA in Greenbelt, MD, requested the assistance of the Prince George’s County Fire/EMS Department. A strange odor and a possible illness in an administrative office of Building #22 at NASA, which also houses radiation labs on the bottom floors, prompted a full-fledged hazardous materials response.

Upon the Fire/EMS Department arrival, all NASA employees inside the building were evacuated and were quarantined in an adjacent parking lot. Decontamination teams were established and prepared to de-con anything and anyone that came out of the building. Paramedics maintained vigil over the evacuees and no injuries or other illnesses were reported.

The Fire/EMS Department Haz-Mat team gathered information about the contents of the building and the possibility of a radiation leak was quickly ruled out by NASA officials. A Haz-mat entry team made their way to a 3rd floor office and tested the atmosphere. They did find water dripping from the ceiling and a buildup of water on the floor above from a leaking HVAC pipe or roof leak.

NASA Command advised that a water leak from HVAC or roof area in an administrative office area is the only unusual thing found in Building #22. No Haz-mat was detected or oxygen displacement noted. At about 8:00 pm, after a through and complete investigation of the entire building with all safety precautions being utilized, the all clear was given and the nearly 60 firefighters and paramedics operating on the scene started to clean up and prepared to return in service.
Posted by PGFD at 8:18 PM 1 comment: Links to this post

PGFD Employees of the Month

Prince George’s County Fire Chief Eugene A. Jones recently had the opportunity to present Employee of the Month Awards to three deserving members of the Fire/EMS Department. Employees of the Month, Supervisors of the Month and Use of Technology Award are presented to individuals after being nominated by their respective Lt. Colonel. 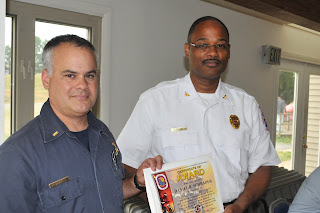 Employee of the Month – June 2010
Fire Lieutenant Daniel R. Schrader
Awarded in recognition of his tireless and professional work in redrafting of Prince George’s County Subtitle 11. Your efforts are beneficial to members of the Fire/EMS Department as well as to the citizens and residents that we service. 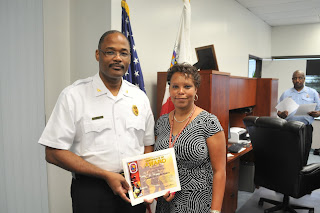 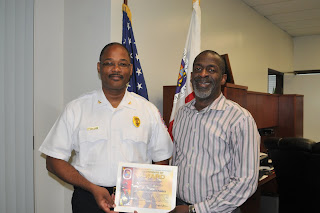 Awarded for their tenacious oversight and assistance with the Management Services Command in providing the Department the capability to ensure that we control non-critical costs and spend at the proper pace, in order to maintain adequate funding for the entire year. The utilization of this fiscal tracking system also affords us an unprecedented level of transparency, accountability and more efficient management of both the 51 (career) and 52 (volunteer) budgets.

Congratulations to our Employees of the Month!!!
Posted by PGFD at 11:52 AM No comments: Links to this post